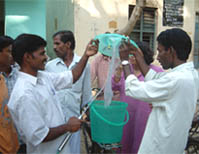 NO MORE BHOPALS: RAISE YOUR VOICE FOR THE PEOPLE OF CUDDALORE

As we near the Bhopal anniversary, youth activists from Chennai and residents of fishing villages are embarking on a 5-day 280km cycle tour from Cuddalore to Chennai. The tour will leave Cuddalore on 28 November and reach Chennai on 2 December.

Created around the time of Bhopal, the SIPCOT chemical industrial estate is notorious for its pollution. More than 19 chemical companies in the area spew poisons into the air all day long. Nestled among these industries are hapless villages that are trapped in what can only be described as gas chambers. Pollutant levels, including of carcinogens such as ethylene dichloride and vinyl chloride, are known to shoot up several tens of thousands of times above safe levels.

The cycle tour will wind its way along the villages of Cuddalore, Pondicherry, Tindivanam, Madurantakam, Chengalpattu and Chennai districts to reach Urur Kuppam — a fishing village in Besant Nagar at around 5 pm on 2 December, 2006.

SHOW YOUR SUPPORT FOR THE POLLUTION AFFECTED COMMUNITIES OF CUDDALORE

Dec 3rd is the 22nd anniversary of the Bhopal Gas Disaster. While the primary goal of the Bhopal campaign is to provide complete justice for the gas affected in Bhopal, it is also vital that we make sure that such disasters do not happen again. It is sad that there are many industrial zones located amidst local communities thus putting the communities within minutes from a disaster. Communities around SIPCOT Industrial Estate is one such community doing the tightrope walk between life and death..

Set up in 1982 by the State Industries Promotion Corporation of Tamilnadu (SIPCOT), the Cuddalore Chemical Industrial Estate is located 8 kms south of Cuddalore town on the seaward side of the Cuddalore-Chidambaram Highway, stretching from Pachaiyankuppam in the North to Semmankuppam in the South. Phase I of the industrial complex spreads over 200 hectares (519 acres) and is set up to accommodate 53 units. Phase II covers 88 hectares (200acres) while Phase III of the complex will cover about 300 acres of land and is located about 26 km from Cuddalore town, near Periapattu village on the Cuddalore-Chidambaram highway. Currently, 22 functional units lie within Phase I of the industrial estate on the western bank of the River Uppanar. A few companies such as EID Parry, Arkema Peroxide, Clariant and Bayer operate outside the SIPCOT limits but in the vicinity of the Estate. These companies manufacture pesticides and intermediates, pharmaceuticals and intermediates, chemicals, plastics and plastic additives, dyes and intermediates and textiles.

Cuddalore is soon to become the pollution capital of Tamilnadu. Already, chemical industries in SIPCOT are discharging deadly effluents in the sea at Rasapettai. The sea near the effluent discharge point is deep red in colour. It won’t be long before fish consumers begin avoiding Cuddalore fish because of the high levels of poisons in the meat. Agriculture is no longer practiced in and around the SIPCOT Industrial Estate, because indiscriminately dumped toxic wastes have poisoned the land and groundwater.

Now, the Tamilnadu Government has announced several destructive proposals, all of which use the sea as a dump for toxic effluents. Not only that, the proposals involve building structures in the sea that will impede free movement for fisherfolk and also present a serious hazard (due to explosion and toxic effects) to fisherfolk.