Air quality of industrial areas are above the standards prescribed by the environment ministry.

If you live in north or south Chennai, chances are that the deteriorating air quality is responsible for your health problems.

The air quality of industrial areas in Ennore, as well as in Poes Garden and Boat Club are above the standards prescribed by the environment ministry, according to a report by Coastal Resource Centre.

The centre took eleven air samples in and around North Chennai and Chennai city as part of their air quality study in Ennore 2016. 24-hour samples were taken using filters fitted to a low volume air sampler and analysed for PM 2.5 (Particulate Matter or dust less than 2.5 micrometers in size). 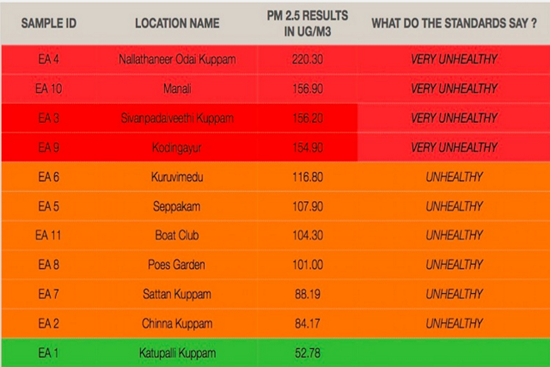 Surprisingly, 10 out of the 11 air samples were between 1.4 and 3.7 times higher than prescribed by the Ministry of Environment, Forests and Climate Change. The air quality of Nallathaneer Odai Kuppam in Ennore is the highest with 220 micrograms per cubic meter air.

Other areas from Ennore include Manali with 156 ug/m3, Sivanpadaiveethi Kuppam with 156. 90 ug/m3 and Kodingayur with 154.90 ug/m3 which is all considered very unhealthy according to the US Environment Protection Agency.

The Ennore region has 3300 MW of installed coal power plant capacity, with more than 1500 acres as dedicated coal ash dumps, says the report.

Highlighting the health effects of bad air quality, Dr. Hissamudin Papa, Founder and Director, HUMA Hospitals said, “We visited these areas in Ennore and found various health issues. Children who are 14 to 15-years-old look like they are 8-years-old. Women have hormonal issues and infertility. Many people have chronic obstructive pulmonary disease in these areas, the pollution needs to be reduced in these areas .” 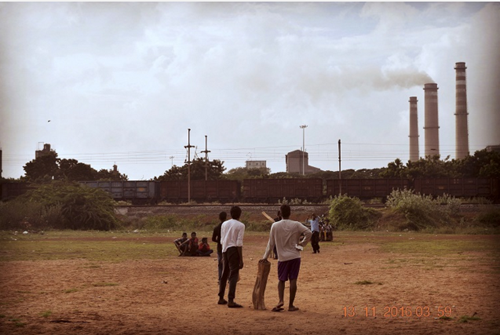 Image: Children playing near a power plant in Ennore

Even areas like Poes Garden and Boat Club ranged 104 and 101 UG/ M3 which is considered unhealthy according to US EPA standards. The high concentration of polluting industries in the citys northern and southern edges is affecting all of Chennai, said Dr Rakhal Gaitonde, a public health specialist.

According to the report by the Coastal Resource Centre, the level of manganese in eight of the eleven samples exceed the US EPA reference concentration for exposure to manganese. There are no standards in India for manganese in ambient air. Also, the levels of calcium silicon and crystalline silica, which are enriched in coal ash were found in the air samples.

“Manganese and Nickel are well known toxins and their effects are well documented. Manganese is predominantly neuro toxin, while nickel is a carcinogen. The measurement of such toxic substances from the rooftops of human settlements is indeed a cause of concern,” added Dr. Rakhal.

The Coastal Resource Centre wants the Tamil Nadu government to take immediate action to improve the air quality in Ennore. The government needs to impose a moratorium on all industrial activities till the environment is restored, initiate long-term and continuous monitoring in Ennore region, said Nityanand Jayaraman, an environment activist.

He added, “No norms are followed by the Tamil Nadu Pollution Control Board. Why should people living in North Chennai have to bare all the harmful effects of the industries?”

The Coastal Resource Centre also wants the government to apprehend polluters and take corrective actions to bring levels of dust and heavy metals in dust below detection limits in residential areas.