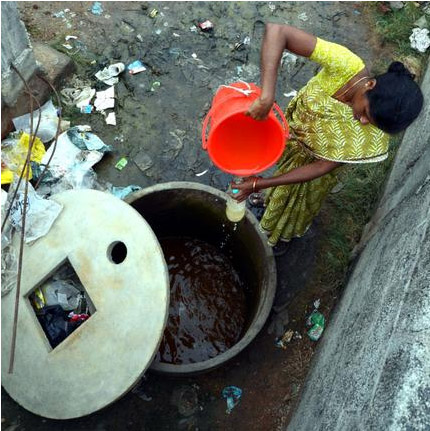 Scarcity amist plenty: Water is available just five to 10 feet below the ground, but it is unusable. Photo: M. Karunakaran

CHENNAI: It may be a paradox that the promise of clean air and fresh water encouraged people to move to Perungudi and Kodungaiyur decades ago. But groundwater here has been contaminated by leachate percolating from the garbage dump yards.

Two studies done by the Centre of Water Resources, Anna University, revealed that the groundwater was contaminated in areas in a radius of 500 metres. Leachate can either be liquid from the waste or rainwater carrying the liquid dumped in these yards.

The data on groundwater near Kodungaiyur dumping site was collected for five years since 2005 and was studied through models to determine the pollution caused by the leachate and the groundwater flow system.

The team from Anna University studied the water samples for 10 parameters, including chromium, iron, fluoride and zinc content.

Areas affected include Ezhil Nagar, Rajarathinam Nagar, Krishnamurthy Nagar and MKB Nagar. Only those localities that fall in the direction of the groundwater flow get affected.

In the Kodungaiyur case, the groundwater flows in the southeast direction from the dumping site affecting the areas falling in the course.

Hydrogeologists and environmentalists pointed out that the level of contamination depends on the soil formation and the possibility of quick percolation was less near dumping sites that had clay as top layer.

The study predicts that the leachate percolation may travel up to a distance of two km in the next seven years if it is left unattended. The findings reveal that the total dissolved solids, which denotes the salinity in groundwater, varies between 2,000 parts per million and 5,000 ppm. Traces of heavy metal content were also found in the water.

A former engineer with the Tamil Nadu Pollution Control Board said that studies conducted by the Board a few years ago in Kodungaiyur showed that TDS levels in points between the Buckingham Canal and the Kodungaiyur Channel ranged between 6,000 ppm and 10,000 ppm.

N.S. Ramachandra Rao, a resident of Rajarathinam Nagar, said that the groundwater has completely been polluted in the recent years after the tonnage in the dumping site increased. Several people have closed borewells as the water is yellowish or murky in colour and it smells. “The water table is available within five to 10 feet below ground. But, we cannot use it and instead depend on private water tankers,” he said.

In Perungudi, the leachate concentration has travelled 0.75 km to 1 km in southeast direction from the dumping yard. Okkiam Thoraipakkam that falls in the course of the groundwater flow is heavily affected. In her study on groundwater contamination near Perungudi site, K. Parameswari, assistant professor, Sathyabama University, said that the TDS level varies from 3,500 ppm to 5,000 ppm.

“The lead, zinc and iron content in the localities close to the dumping site exceed permissible limit. But high iron content could also be due to geological formation,” she said.

Five borewells were dug at different depths for the study and nearly 40 samples were taken. “The marshland holds rainwater and recharges the groundwater. As the dump yard is close to the marshland, leachate also percolates during summer. There may be other reasons such as release of sewage for the high TDS level. But, leachate from dumping site contributes to 60 per cent of the contamination,” she said.

Environmentalist N. Srinivasan warned of the alarming increase in the level of toxicity of groundwater and all round pollution. Citing the results of a study done by Annamalai University and Ministry of Education, Japan, on ‘high levels of organochlorines in mothers’ milk in Chennai'(20062007), where samples of breast milk from mothers in Perungudi, among other places in Tamil Nadu were collected, Mr. Srinivasan said that insecticide residues were found in all the samples.

“The site has been shown to be a large producer of dioxins and other poisonous gases evolved by the intentional and unintentional burning of solid wastes by waste pickers and by the production of methane gas, respectively. There is every possibility of spraying of chemicals in the site itself for the control of diseases. Many domestic animals graze in the site and their flesh and products are consumed forming a pathway for the toxic chemicals to reach humans,” the report said.

R. Saravanan, professor, Centre for Water Resources, Anna University, said to prevent further contamination of groundwater, a separate disposal site must be provided for bio medical waste. The dumping yards must be provided with bunds and trenches to minimise surface runoff and rainwater from collecting in it. Drains must be built to collect leachate apart from adopting source segregation and composting of organic waste, he said.

(With inputs from Deepa H. Ramakrishnan)

1. Areas within 500 metres from Kodungaiyur dump site are suffering from leachate contamination

3. The zinc and iron content in water varies between 7.5 mg/litre-10 mg/l. This is above the desired limit of 5 mg/l in areas close to the Kodungaiyur dump site.

1. Okkiam Thoraipakkam is the most affected with leachate contamination

2. Lead content in groundwater is 0.97 mg/l whereas the permissible limit is 0.1 mg/l

3. zinc content in the groundwater is 13.35 mg/l, well above the permissible limit