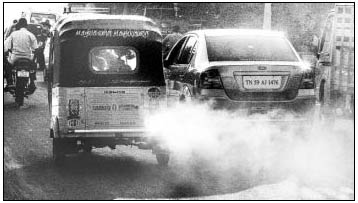 Alarming trend: Civil society experience in some places seems to suggest that disturbing levels of pollution are still being witnessed.

The India Pollution Map, a website project at the Centre for Development Finance (CDF), has tracked the government pollution monitoring regime and has mapped aspects of air and water quality through an online mapping tool. Data and information directly received from the Central Pollution Control Board (CPCB) and State Pollution Control Boards (SPCBs) have raised some insightful questions about the depth and quality of information available on pollution in the country. Findings from a pilot level mapping exercise undertaken as part of this project for the states of Maharashtra and Tamil Nadu indicate that the information architecture necessary to make targeted responses for action falls well short of expectations of civil society.

To take a specific case, the project mapped the data from the industrial air quality monitoring carried out by the TNPCB during the year 2009. The data has shown that most industries seem to be compliant with the National Ambient Air Quality Standards (NAAQS) standard. However, civil society experience in places like Cuddalore and Mettur seems to suggest that disturbing levels of pollution are still being witnessed.

A recent news report of an acid leak in the Cuddalore SIPCOT industrial estate provides credence to this argument. So issues about accuracy and asymmetry of pollution data and quality of information about how much is in excess (in quantities that are above standards) and how much of it needs to be controlled are still unresolved.

The primary reason for this situation is that data from the National Ambient Air Quality Monitoring Programme (NAMP) is largely based on conventional air quality monitors which monitor only criteria pollutants, while infrastructure for monitoring of specific industries and industrial clusters is still to take off in a substantive manner.

A Parliamentary report in 2008 highlighted the poor pollution monitoring infrastructure and the lack of sufficient online monitoring to track emissions more systematically. This translates into a lack of capacity for understanding the distribution of newer and more toxic pollutants in turn creating a fundamental lacuna in generating comprehensive air quality information.

In this background the proposal by the Ministry of Environment and Forests (MoEF) to introduce an air pollutants trading system seems inappropriate and premature. The MoEF through a discussion paper Towards an Emission Trading Scheme for Air Pollutants in India has mooted the introduction of a permit and trading system for air pollutants from industrial sources on the lines of the cap-and-trade mechanism used for greenhouse gas emissions. The system is an attempt to secure better compliance by leveraging technology and harnessing markets.

The MoEF’s paper cites recent improvements in Tamil Nadu’s monitoring systems symbolised by the Care Air Centre for online monitoring of pollution from industries, and initiatives of a few other states like Maharashtra and Gujarat but this does not justify initiating a national level scheme as many other concerns still remain.

One such is the poor implementation of standards. The revised NAAQS has only recently been introduced and industry and government are yet to monitor the new pollutants under the upgraded standards. At the very least, the new set of standards has to be fully implemented and the monitoring of all pollutants has to be operationalised before consideration of trading excess pollutants.

A further aspect that needs a critical review is whether or not market-based means of pollution control be effective in India? In the U.S., the air pollutants trading scheme was introduced in 1995 to mitigate the problem of acid rain by trading in sulphur dioxide. How much success have other countries had with such schemes? The MoEF needs to provide a more robust paper addressing the effectiveness of this system in tackling compliance.

Without doubt securing environmental compliance has been a challenge and India’s approach to pollution monitoring and prevention requires fresh thinking. But India can ill-afford stand-alone expeditiously pushed schemes that presuppose that the house will be put in order. Unless the more fundamental questions of accuracy and depth of information are addressed, the introduction of a trading system is likely to get mired in controversy.

It is imperative therefore, that the proposed scheme is carefully considered and made widely consultative if the MoEF truly aims to gain the support and consensus of various stakeholders particularly those affected by environmental pollution and its impacts.

( Rajesh Rangarajan is a Senior Researcher and Project Lead of www.indiapollutionmap.org at the Centre for Development Finance. Sivapradha C.R. is a Researcher with the same organisation. The views expressed are their own. )