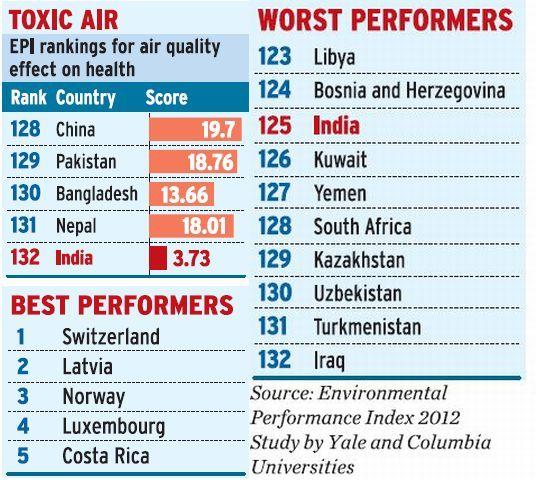 NEW DELHI: In a study by Yale and Columbia Universities, India holds the very last rank among 132 nations in terms of air quality with regard to its effect on human health.

India scored a miniscule 3.73 out of a possible 100 points in the analysis, lagging far behind the next worst performer, Bangladesh, which scored 13.66. In fact, the entire South Asian region fares badly, with Nepal, Pakistan and China taking up the remaining spots in the bottom five of the rankings.

These rankings are part of a wider study to index the nations of the world in terms of their overall environmental performance. The Yale Center for Environmental Law and Policy and Columbia’s Center for International Earth Science Information Network have brought out the Environment Performance Index rankings every two years since 2006.

In the overall rankings which takes 22 policy indicators into account India fared minimally better, but still stuck in the last ten ranks along with environmental laggards such as Iraq, Turkmenistan and Uzbekistan. At the other end of the scale, the European nations of Switzerland, Latvia and Norway captured the top slots in the index.

India’s performance over the last two years was relatively good in sectors such as forests, fisheries, biodiversity and climate change. However, in the case of water both in terms of the ecosystem effects to water resources and the human health effects of water quality the Indian performance is very poor.

The Index report was presented at the World Economic Forum currently taking place in Davos, where it’s being pitched as a means to identify the leaders and the laggards on energy and environmental challenges prior to the iconic Rio+20 summit on sustainable development to be held in Brazil this June.

It is official: India has the world’s most toxic air