Chennai, 3 December 2005: Youth, children, volunteers and supporters of the struggle for justice by survivors of the 1984 Union Carbide disaster in Bhopal today participated in a 2 km run from Besant Nagar to Elliots Beach to mark the 21st anniversary of the Bhopal Gas Tragedy. The run, which concluded with a candle-light vigil, was held to highlight the plight of pollution-impacted communities 21 years after the world’s worst industrial disaster. The run was flagged off after a street play “Ini Oru Bhopal Vendam” performed by children from Urur-Olcott Kuppam and directed by Suresh Dharma of Black Theatre. 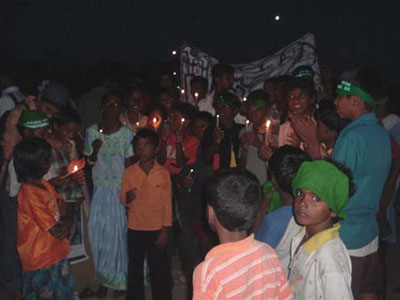 Children participating in Candle light vigil on
the 21st anniversary of the Bhopal gas Disaster.

The children warned that even in Tamilnadu, many industries were polluting without fear of action from the authorities. They appealed to people to organize themselves and fight pollution in order to safeguard nature. The 2 km route around Besant Nagar was marked with youth volunteers holding placards of victims of industrial pollution from Bhopal, Cuddalore, Mettur, Kasargode and Vietnam. Bhopal and Vietnam are among the several places where Union Carbide and its new owner  Dow Chemical — have caused lasting damage to the environment and human health. Dow Chemical was a major supplier of Agent Orange, a dioxin-tainted chemical sprayed by the US military during the Vietnam war. As a result of the chemical warfare, more than 100,000 children are currently suffering from various deformities.

Organisers of the event, the International Campaign for Justice in Bhopal, warned Tamilnadu residents that several Bhopal-like situations loomed in the industrial areas of the state. Bhopal-like disasters can happen when the state colludes with the industry in downplaying pollution-related complaints of residents or workers. In particular, the campaign singled out the Chemplast and Malco factory complexes in Mettur, the SIPCOT Industrial Estate in Cuddalore, the Ennore-Manali Petrochemical belt, Sterlite’s illegal copper smelter in Tuticorin, Orchid Chemical’s factory in Alathur, the dyeing units in Tirupur, Hindustan Lever’s mercury waste dumps in Kodaikanal, as evidence of the State’s failure to safeguard citizens and the environment. The campaign strongly criticizes President Abdul Kalam’s visit to Orchid Chemicals on the eve of the Bhopal disaster, and barely one month after a massive explosion in the factory killed one and injured two. 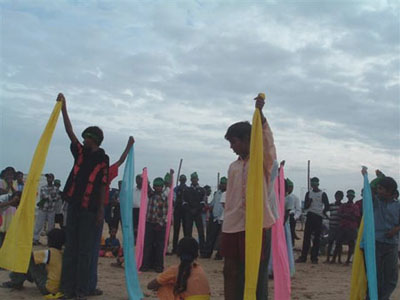 More than 20,000 people have died in Bhopal since the tragic gas leak on December 2-3, 1984. A criminal case is pending against Union Carbide, but the Indian Government under pressure from the US Government has refused to enforce the company’s appearance to face trial. Also, the survivors of the disaster and residents living around the now-abandoned factory site in Bhopal have been forced to consume water contaminated by the thousands of tons of toxic wastes left behind inside and outside the factory by the company. This is the plight of thousands of people living near industries all over India.

Participants at the vigil took a pledge to fight pollution, safeguard nature and prevent more Bhopals from happening.