5 May, 2007, GUMMIDIPOONDI  Gummidipoondi MLA Mr. K.S. Vijaykumar addressed an All-party public meeting calling upon the Tamilnadu Government to give up plans to set up a toxic waste dumpsite and incinerator in S.R. Kandigai Panchayat. Mr. Vijaykumar has also raised the issue of the toxic facility at the recent assembly session. The public meeting, held at Gummidipoondi bus stand, was led by Mr. Rose Pillai, S.R. Kandigai Panchayat President. Representatives from CPI (M), AIADMK, MDMK, DMK, PMK, DMDK, DPI, Congress and Puratchi Bharatam attended and addressed the meeting of more than 1000 residents. 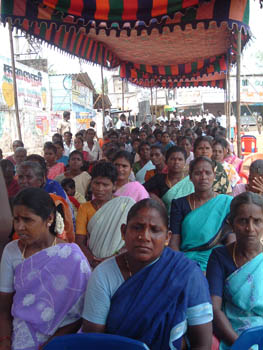 Participants of the all party public meeting

In January 2006, M/s Tamilnadu Waste Management Ltd begin work on a landfill-cum-incinerator project in a 40 acre plot in SIPCOT, Gummidipoondi, despite massive public opposition and unanimous condemnation by local villagers of the project at the Government-held public hearing. A Preliminary Environmental Appraisal prepared by Nagpur-based NEERI concluded that the Gummidipoondi site was unsuitable for the location of a toxic waste facility because of the porous nature of the soil, the high groundwater table and the rich sweet-water reserve in the Gummidipoondi area. S.R. Kandigai Panchayat has been singled out as a potential supplier of groundwater to Chennai in times of scarcity.

Several states, including Tamilnadu, are currently in violation of a Supreme Court order requiring all states to comply with the Hazardous Wastes (Management & Handling) Rules, 1989, and provide adequate infrastructure, such as landfills, for treatment and disposal of industrial wastes. For 15 years since the notification of the Rules, the Tamilnadu Government allowed industrial expansion in violation of the Rules. Threatened with a contempt notice from the Supreme Court, the Government hurriedly and arbitrarily selected Gummidipoondi as a site for the toxic waste facility despite the fact that it does not meet any of the siting criteria laid out by the Central Pollution Control Board. The TNPCB is a promoter in the Gummidipoondi project, according to the Preliminary Environmental Appraisal. 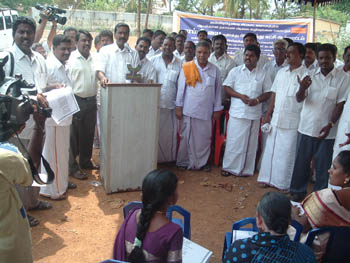 Villagers allege that as a stakeholder in the project, the Tamilnadu Pollution Control Board has no neutrality as a regulator of the highly polluting project. As a result, the TNPCB and the private promoter M/s Tamilnadu Waste Management Ltd are colluding with the District machinery to bypass all regulations and laws, including Panchayat rules. TNWML has not even applied for permission from the local bodies for building the project, even though the Tamilnadu Panchayat Building Rules, and the Tamilnadu Panchayats Act clearly require industries to obtain local Government clearance before commencing a project. Ironically, the Police and the District Administration have extended police protection to TNWML to intimidate the Panchayat President from insisting on a local Government clearance.