GUMMIDIPOONDI, 12 January, 2006 More than 200 residents, primarily women, from Gummidipoondi and neighbouring areas physically entered and stopped work at the project site of Tamilnadu Waste Management Ltd (TNWML)s hazardous waste landfill and incinerator. The construction was being carried out without permission from the local Government body and against the wishes of local residents. Women from Tamilnadu Womens Collective in Redhills and nearby areas and representatives of Community Environmental Monitoring (CEM) also joined the residents in solidarity. 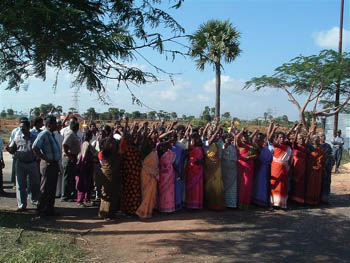 Speaking on behalf of the village, Mr. T. Sudhakar of Pappankuppam said “We will move into the project site with our children and families, and physically block the location of the landfill and incinerator if the company and Government decide to press ahead with the project. If the Supreme Court Monitoring Committee, the TNPCB and Government does not protect us, we will protect ourselves.” 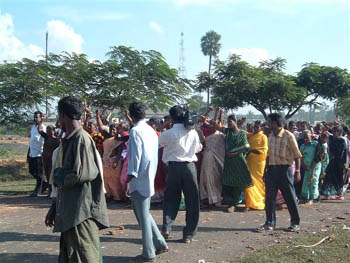 TNWML, Hyderabad-based Ramky Associates subsidiary, commenced civil works on the site on January 2, 2006, despite being warned on two occasions against construction without securing permission from the Panchayat Union Council as per the Tamilnadu Panchayats Act, 1994. In June 2005, the Gummidipoondi Panchayat Union issued a resolution against the toxic facility. S.R. Kandigai Panchayat president Mr. Y. Suresh has today served notice under the Panchayats Act to the project promoters asking them to stop work and restore the site to its original condition. A police complaint filed on 9 January, 2006, is pending with the SIPCOT Gummidipoondi police station.

Villagers said they are stopping work because Government agencies have failed to discharge their duty of protecting the law. Residents have approached all levels of the Government and even filed a petition in the High Court that is likely to come up shortly. They said that they have a duty to protect their environment, and prevent illegalities. 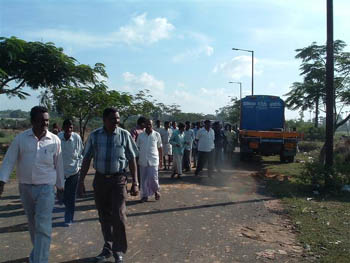 The predominantly agricultural community in the area contends that the project violates Supreme Court-sanctified siting guidelines, and will poison subsurface water, affect agriculture and threaten the groundwater and public health in the residential areas that lie about 500 metres from the project site. The project site has a 15-20 feet deep porous sand-stone layer with significant subsurface water flow towards the S.R. Kandigai village and farmlands nearby. Siting guidelines prohibit the setting up of such facilities near water bodies. However, the project site is less than 100 metres from the Kuluva Cheruvu pond. Villagers also point out that it is ironical that the Tamilnadu Government is contemplating setting up a landfill in an area that supplied several hundred tankerloads of freshwater to Metrowater in 2004. “On the one hand, the Government is contemplating mega-schemes such as the Rs. 500 crore desalination plant. On the other, it is spending money to poison good water,” residents said. 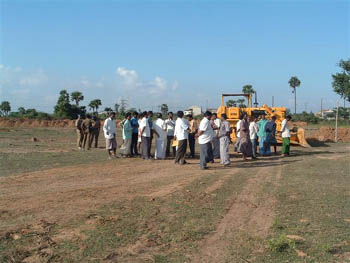 Complaints were filed with the Supreme Court Monitoring Committee on Hazardous Wastes on both occasions, but no action was taken. In March 2005, villagers attended a public hearing organised by the District Collector of Thiruvallur and unanimously rejected the plant. The public hearing was illegal because no Environmental Impact Assessment was provided to the public in advance as required by law.

“The Supreme Court Committee is part of the problem. They have recommended the siting of the facility in Gummidipoondi without first evaluating its suitability. The fact that the Committee has failed to act on our complaints shows how little premium they place on local peoples aspirations, and their disregard for laws protecting the environment and rights of Panchayats. The project violates SCs siting guidelines, the EIA Notification, 1994, the Hazardous Waste Rules and the Tamilnadu Panchayats Act, 1994. How can the SCMC condone this?” 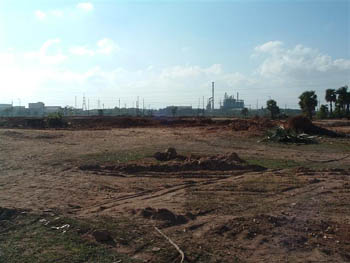 The Tamilnadu Government is in a hurry to set up the toxic waste facility because it fears being pulled up by the Supreme Court for failing to set up a facility to receive industrial wastes despite being required to under the Hazardous Wastes Management Rules, 1989. Despite reminders by the Court since 1997 urging States to follow the Rules, the Tamilnadu Government has been unable to find a suitable site. Gummidipoondi was chosen not by any scientific process of site selection, but arbitrarily by the Supreme Court Monitoring Committee after an earlier site chosen by the Tamilnadu Government in Melakottaiyur had to be abandoned because of public opposition.