CHENNAI — Mr. I. Pugazhenthi, MLA (DMK) Cuddalore, yesterday announced that Chemplast Sanmar’s proposed PVC factory is not welcome in SIPCOT, Cuddalore, because of its pollution potential and public opposition. He referred to the fact that Chemplast’s PVC proposal had been granted permission by the Tamilnadu Government despite an Assembly resolution to not site any more chemical or polluting industries in SIPCOT, Cuddalore. He pledged his support, and assured the people of Cuddalore that he would raise the matter in the Assembly in the forthcoming session and with the Union Minister of Environment Mr. A. Raja. Chemplast’s proposal is currently pending clearance from the Ministry of Environment for more than four months now because of public opposition and lack of clarity on technological issues. 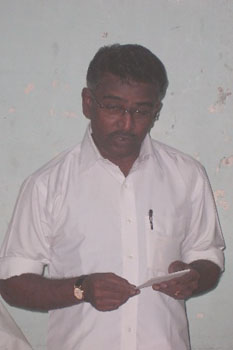 Mr. I. Pugazhenthi, MLA (state legislator) from Cuddalore, offers support to his
constituency’s demand to prohibit the setting up of polluting industries in SIPCOT,
Cuddalore. He assured Cuddalore residents that he will not permit the establishment
of Chemplast’s PVC factory in the industrial estate.

“We know from experience that every step of PVC production is fraught with hazards, and want to prevent others from suffering the way we have. That is why we are in Cuddalore to tell the people to beware of PVC and Chemplast. We have not come to Cuddalore seeking justice for ourselves, but out of our obligation to the communities here,” said Mr. K.M. Ardhanari, an 87-year old farmer whose effluent-contaminated lands have been unproductive since 1963. 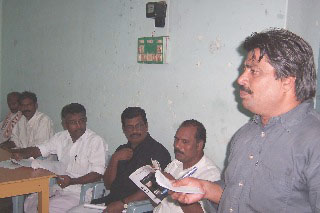 Mr. P. Thamaraikannan, chairman of Cuddalore District Panchayat Union, also announced that the Union had resolved against the setting up of any more polluting units in SIPCOT. This resolution was adopted on 7 September, 2005. Mr. Thamaraikannan also reiterated that his party, the PMK, had declared its opposition to Chemplast’s proposed factory in SIPCOT.

Others present at the meeting include Mr. Vanthia Thevan from Marumalarchi Dravida Munnetra Kazhagam (MDMK), Mr. Thirumalvallavan of Pasumai Thaayagam, and Mr. Shanmugam of PMK. 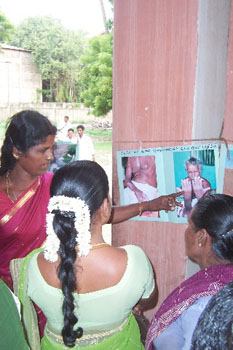 Mrs. A. Bhagyam, farmer and resident of Mettur, walking Cuddalore residents through a photo-exhibition of Chemplast’s pollution in Mettur and its effects.

Community and solidarity groups from Cuddalore and Chennai pledged their support to the community struggle against pollution in Mettur, and have declared their plans to undertake the Mettur-Cuddalore march in the near future. An earlier march, scheduled to kick off on 5 September, was scuttled by the Salem police at the last moment. The police were acting on instructions from Chemplast.

Cuddalore MLA Says No to Chemplast PVC plant in SIPCOT