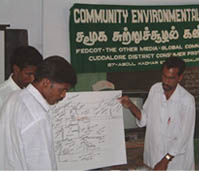 Analysis of 3 air samples taken in 2010 from SIPCOT Cuddalore: