Gummidipoondi, 9 January 2006: Tamil Nadu Waste Management Ltd. a subsidiary of Hyderabad based waste management company M/s Ramky Enviro Engineers has commenced civil works, including excavation at the hazardous waste landfill and incinerator, without securing permission from the Panchayat Union Council as is required under the Tamilnadu Panchayats Act, 1994. It is reported that the State Government has assured the company of its support in the event of any fallouts as a result of the ongoing violations. In June 2005, councilors of the Gummidipoondi Panchayat Union passed a resolution against the siting of the toxic waste disposal facility in Gummidipoondi, given the regions significance as an agricultural zone and an area rich in groundwater reserves. In 2004, Metrowater extracted several tankerloads of water each day from Pappankuppam, the village closest to the landfill site. Ramky is a notorious company known for its botched clean-up efforts in Bhopal, and for its polluting landfills and incinerators in Hyderabad and near Mumbai. In Chennakuppam, near Chennai, the company has located a medical waste incinerator barely 200 metres from a drinking water body and less than 400 metres from habitation. At Chennakuppam, the company is also accused of encroaching on forest land. 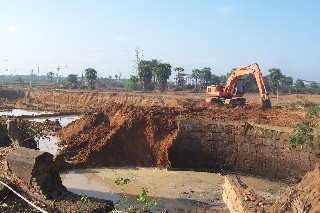 Illegal construction at the landfill site is progressing at a brisk pace
as Ramky tries to complete as much of the illegal facility as possible
before it is apprehended by the Courts. The construction is being
carried out with permission from the local Government and against
the wishes of local residents.

B.R. Kandigai villagers reported the violation to the Gummidipoondi police station and filed a police complaint against Tamilnadu Waste Management Ltd and Ramky Associates. A complaint has also been lodged with the Block Development Officer at the Panchayat Union Council office. 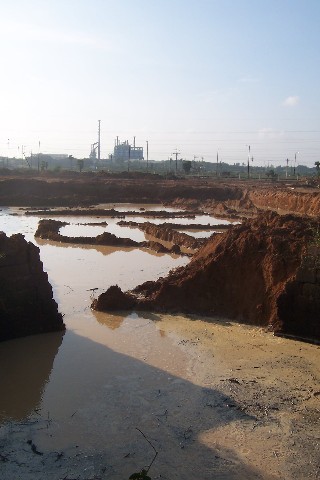 The excavators struck water at less than 10 feet. The location of
a landfill at a site with a dynamic sub-surface water flow is likely
to spread toxic contamination through sub-surface water towards the
agricultural lands and villages located less than a kilometre away.

Excavation onsite has exposed the inappropriateness of the site for location of a toxic waste landfill. The site is characterized by the availability of rich sub-surface water starting at 6 feet and upto a depth of 25-30 feet at some places. This was verified at the time of inspection by CEM on 9 January, 2006. 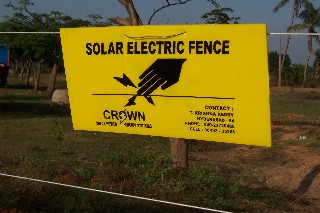 Protecting their illegality by erecting electric fences,
Ramky has exposed its friendly intentions towards the locals.

The company has also erected an intimidating electric fence at the site. It is common for villagers to graze their cattle in the nearby lands, especially considering the presence of the Kuluvacheruvu lake nearby. Local villagers have said that they will not allow the facility to come up and are now considering their options given that all their attempts to address the matter by approaching Government and police has failed.

The International Finance Corporation has ignored local complaints and prima facie evidence of legal violations, and is going ahead with a loan of $20 million to the company.