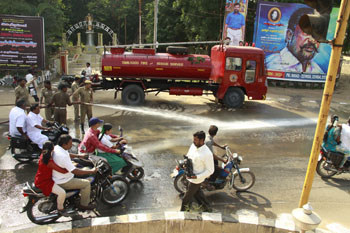 Cuddalore, 15 August 2011: Lorry transporting sulphur for industries in SIPCOT overturned in Cuddalore town spilling large quantities of its contents on the main road today. According to sources the incident took place early in the morning near the Town Hall at Cuddalore new town. Vast amounts of yellow powder like substance was seen on the main road. The matter came to the notice of SACEM monitors when at around 8.50 am they saw fire tenders flushing the roads with water. At first it seemed that this was an initiative to clean the roads for the Independence Day celebrations but upon enquiry the matter about sulphur spill was discovered. 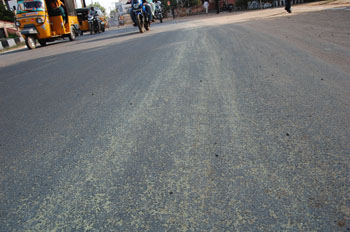 No one has reportedly been injured. A complaint about the incident and demand for action on SIPCOT units to force them to use safe methods of transporting chemicals has been placed with the TNPCB.