The Hindu
by PAROMITA PAIN

It happened long ago, but the scars will be there forever. 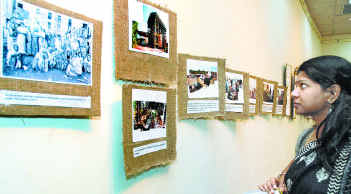 STARK REALITY: Living with a nightmare.

Nightmares can be terrible. They can leave you sweaty, teary and scared. What would you do if nightmares were of the gaseous variety and refused to disappear when daylight streamed in or grew worse when you woke up? Ask the victims of the Bhopal gas leak disaster. Their nightmare began shortly after midnight on Sunday December 3, 1984,when poison gas began leaking from the Union Carbide factory in Bhopal.

The “1000 Bhopals” photo and painting exhibition on pollution and environment at the Lalit Kala Academy, as part of a week long environmental awareness programme organised by International Campaign for Justice in Bhopal on the 22nd anniversary of the world’s worst industrial disaster. The photos were stark images of pollution-impacted communities from around the country. Reports say that even far from the factory, at Rani Hira Pati ka Mahal the ground was so thick with the dead that you could not avoid treading on them. The mounted frame of Dr. Sathpathy, the forensic expert at the state government’s Hamidia Hospital, the only one functioning on the night of the disaster, shows him with the pictures of those whose autopsies he has performed. The captions states the doctor’s eloquent story  “I must have performed more than 20,000 autopsies so far. No relative of a gas victim can get a compensation claim for a death without my certificate. It has been a nightmarish experience.”

The young too weren’t spared and some like Rubeda Banu’s three sons will forever bear the scars. Shakeel, who was a week old when the tragedy occurred, Raes Ahmed who was 18 months and Muzaffar who was born a year later, all stand less than five feet tall in the picture. The most arresting frame was probably the one that showed sacks of skulls discarded after research at the Hamidia Hospital. But what is even more startling is probably the fact that the Bhopalis are a people still fighting for justice.

December 2 is the Day Against Corporate Crimes. As someone far removed from such catastrophes there is a lot you can do. Talk about such crimes in your school. Debate solutions to these issues and then mail the President from the www.presidentofindia.nic.in site. Find out where else in the world people have been affected and what steps were taken to alleviate their suffering.