Chennai, 11 February 2007: The cycle tour to highlight the environmental crisis in SIPCOT Cuddalore culminated today in Chennai and ended with a cultural program and solidarity meeting of city based groups who resolved to support the struggle against new polluting facilities in Cuddalore. The two day tour that resumed on Friday from Tindivanam covered a distance of about 150 km to reach Chennai. A reception was held for the cyclists at the temple square of Urur Kuppam on Elliots beach where they were welcomed by Tamil actress Kalai Rani and supporters of the Cuddalore campaign. “Industrial pollution has converted Cuddalore into a disaster zone. We are pained at the horrible environmental conditions under which people in SIPCOT Cuddalore live, and we undertook this cycle tour to appeal to the Government to improve conditions in Cuddalore,” said Rupesh Kumar, a representative of Youth for Social Change, one of the coorganisers of the event. 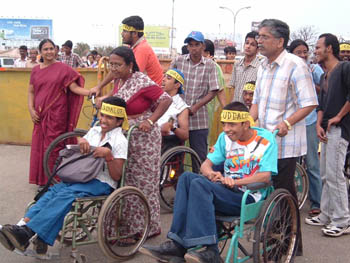 The tour held public meetings at Tindivanam, Chegalpettau, Kovalam and was joined by students of Vidya Sagar in Besant Nagar before reaching Urur Kuppam temple square where the cultural program was held. The cultural troupe of Gana Viji presented a street play depicting the sufferings of the residents of Cuddalore due to the industrial operations. Various songs and traditional theppatam dance was also presented. Later addressing the meeting, residents of Cuddalore and Mettur who were also a part of the cycle tour informed the gathering about the problems of pollution and appealed for solidarity support in their fight against the new polluting facilities planned for Cuddalore.

Cuddalore is a toxic hotspot. Numerous reports, including by the State Human Rights Commission admit that Cuddalore is overpolluted and that no new polluting industries should be set up in the region. Rather than mitigate pollution, the Government is planning to target Cuddalore residents with more and more polluting industries. Currently, the villagers are fighting a desperate battle to prevent the setting up of a PVC plastic factory by Chemplast Sanmar in Semmankuppam village. A 1320 MW thermal power plant, several textile dyeing industries, a 6 million tonnes per annum oil refinery and a scheme to pump toxic effluents from textile dyeing units in Tiruppur is part of plans to sacrifice Cuddalore. 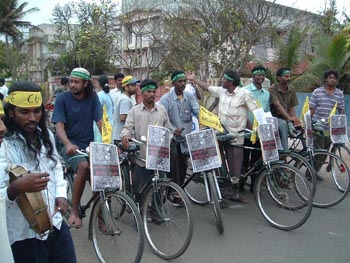 The tour was first launched in November 2006, where 19 members including youth from Chennai visited SIPCOT Cuddalore to have a first hand experience of the living conditions and environmental pollution in the area and bring the message back to Chennai on the cycles. The tour had to be discontinued after an accident which claimed one of the cyclists life. 20 year old K. Gurubalan drowned in a pond after he entered it for bathing while taking a break en route. The participants of the tour resumed their journey in memory of Guru to spread the message on environment. “Guru was deeply affected by the horrendous environmental condition in SIPCOT Cuddalore. His death has made our resolve to fight injustice in Cuddalore stronger,” said Jeny Doly of Youth for Social Change who joined the tour for the first time.