12 February, 2008. CHENNAI — Levels of hydrogen sulphide, a potent neurotoxin that smells of rotten eggs, was detected at roughly 1400 to 29000 times above permissible levels at various locations within Chennai city and Manali. A steady gust of Ammonia up to 7.4 times higher than permissible levels, and a one-hour average of sulphur dioxide – another deadly gas commonly associated with industrial and vehicular pollution – at 13 times permissible limits was detected at a location downwind of Madras Fertilisers Ltd in Manali. Within the city, sulphur dioxide was 5 times higher than acceptable levels near Flagstaff House, on the Northern bank of the River Cooum. Chennai-based community support organization Community Environmental Monitoring and San Francisco-based Global Community Monitor are testing a real-time air monitoring equipment in India that has been successfully used by pollution-impacted communities in USA to verify the claims of regulatory agencies and polluters. 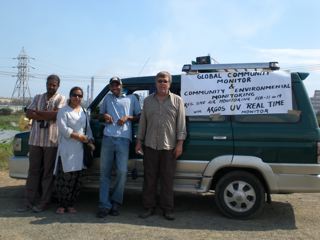 The realtime monitoring team in Manali 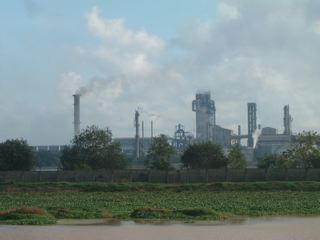 The levels of hydrogen sulphide around the Cooum River, near MLA Hostel, state guest house, and behind Ezhilagam where public demonstrations are permitted were more than 1000 times higher than safe levels. The characteristic smell of the Cooum, and all streams, rivers and canals in Chennai, is because of hydrogen sulphide. The gas causes eye irritation, gastrointestinal disorders and respiratory problems. More dangerously, it attacks the central nervous system, and affects children’s mental development. The children living along the banks of the Cooum are likely to be among the worst affected. Community Environmental Monitoring, however, said that the Government should not use this as an excuse to evict the riverside houses. Rather, the river should be cleaned up. Metrowater is a significant contributor to sewage pollution of Chennai’s rivers.

Safe limits of Hydrogen sulphide in the air is 0.834 ppb as per United States Environmental Protection Agency. India does not have standards for hydrogen sulphide (H2S) in ambient air. In India, the safe levels for Ammonia is 575.29 ppb and for SO2 (sulphur dioxide) is 30.51 ppb.