Chennai 15 November 2007: 100 agitated people from Mettur assembled at the Tamilnadu Pollution Control Board at Guindy today to present a copy of a report, ‘Unfolding Diasater – A Study of Chemplast Sanmar’s toxic contamination in Mettur’ and demanded that the TNPCB take the required action to control pollution in the area. The villagers mourned the death of land, water and soil and demanded to meet a senior authority with the TNPCB to submit a copy of the newly released report. The report shows that toxic chemicals were indeed present in the environment in Mettur around Chemplast Sanmar at extremely high and dangerous levels. 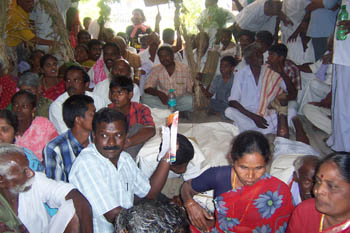 Chemplast Sanmar has five units including a chloromethanes plant, a PVC plant including units to produce ethylene dichloride (EDC) and vinyl chloride monomer (VCM). The industry is said to store hazardous waste in unlined pits inside the factory premises which leaks out and caused contamination of ground water and soil. Untreated effluents from the industry are also released in the river Kaveri through pipelines.

The people in Mettur have raised the issue of pollution and pollution induced damage to land, water and health with the TNPCB, and other concerned authories since 1966. However, the villagers report that in spite of a number of studies conducted in the area proving contamination, the TNPCB has taken no action against the company to remedy the situation. They also allege that TNPCB in the past has only worked in collusion with the company. 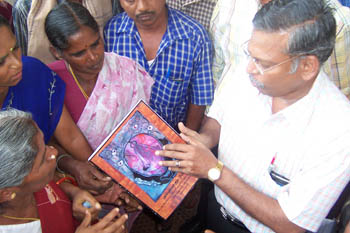 This morning at TNPCB, the Joint Chief Environment Engineer, Mr. Balaji came to meet the people and receive the report. The villagers complained of their contaminated water, loss of agricultural productivity, frequent health problems, and loss of livelihood. Mr.Balaji listened to the complaints and promised to take the necessary action in favour of the people. The villagers wanted his assurance on this promise as they had already met with an official from TNPCB in January 2006 who had made similar promises which were never implemented.

However, most of the people gathered today had given in their complaints, and after having received an assurance from Mr.Balaji that the TNPCB would come to Mettur, meet with the local people and assess the problem on their own without the company’s interference, the people left hoping that this meeting would not be just another ritual in their struggle.