KODAIKANAL, 20 May, 2007 — Ex-workers from the Hindustan Lever mercury thermometer factory and members of Community Environmental Monitoring today launched a photoexhibition-cum-awareness booth to educate tourists visiting the Kodaikanal flowershow on the harmful effects of mercury released from Hindustan Lever’s factory between 1984 and 2001. Kodaikanal is a beautiful hill town that attracts tourists and honeymooners from all over India during the summer. A second-hand mercury thermometer factory imported from USA in the early 1980s is now closed down after residents and ex-workers exposed HLL’s dangerous practice of dumping mercury wastes in the forests and in a scrapyard within a crowded part of the town. Mercury is a potent neurotoxin that can have both acute and long-term effects, including on the offspring of exposed persons. 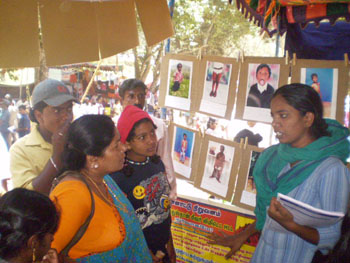 Several hundred people visited the exhibition. Passers by were curious about the exhibition and were shocked to learn that a reputed company like Hindustan Lever was so casual with a poisonous substance. Because no safety precautions were followed in the factory, the workers remained unaware about the hazards of mercury exposure. As a result, all workers were exposed to mercury, and many of them suffer serious health problems. Children born to some of the ex-workers too have shown symptoms that are consistent with effects of mercury exposure. The company has refused to acknowledge the health effects and has said no compensation will be given to ex-workers or their children. 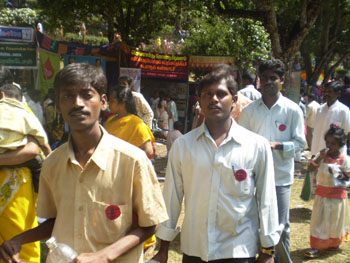 An overwhelming number of tourists visiting the exhibition, however, were more ready to believe the workers. Several of them signed petitions urging Hindustan Lever to clean-up Kodaikanal and compensate affected workers. At least 75 people purchased badges made of chart paper that read: “HLL: Clean Up Kodai Now.” 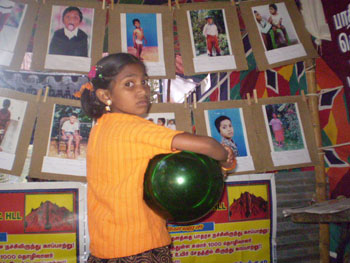 An NDTV reporter covered the exhibition and the HLL story focusing on the health condition of the ex-workers and their children. This is expected to come out in this evening’s Southern Edition of NDTV. 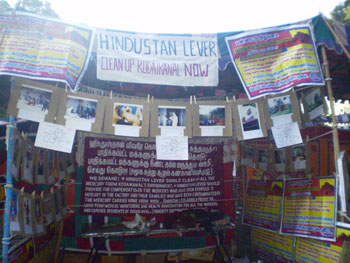 Hindustan Lever moles were also about. The supervisor of the now-closed factory visited the stall and took photographs to send back to his masters.