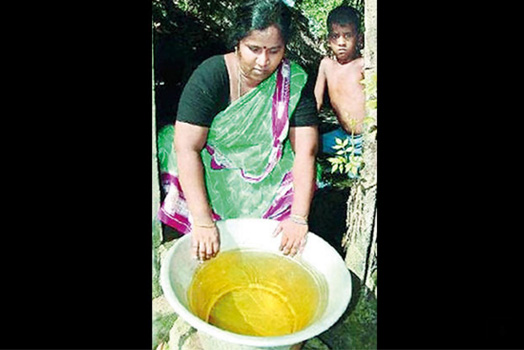 Picture of resident with contaminated water

Chennai: The villagers had approached the NGT in March 2015, after failing to receive any response to their complaints of groundwater contamination, evidenced by an RTI query. In their affidavit, they also demanded a remediation of the groundwater to the state it was before the industries sprouted in the region.

T Arunselvam, a resident, said many SIPCOT industries churn out dyes, chemicals and even rocket-fuel component. “Due to the intensive water use by these industries, there has been depletion in ground water levels, affecting the villages located in and around the complex. We filed an RTI with the Tamil Nadu Pollution Control Board (TNPCB) on the groundwater and analysed it. This revealed the presence of 22 heavy metals, which can be harmful for the residents. We cannot use the groundwater and have been demanding clean water,” he added.

S Pugazhendhi, a fisherman from Sangolikuppam village and a member of the SIPCOT Area Community Environmental Monitors (SACEM), said the groundwater is now available only at a depth of 800 feet, whereas in the past they would find water at a depth of 30 feet. “We have regularly protested to the authorities to provide us with clean drinking water. Tankers are provided by SIPCOT once a week but this is not enough for our needs.”

The RTI data from TNPCB revealed that 41 samples from at least 11 locations in and around SIPCOT were tested between February 2013 and April 2014, Cadmium level was 3 to 125 times above limits in samples collected from Kudikadu overhead tank. Total chromium level was 1 to 2.4 times above limits in the samples from the same location. Lead was 1 to 2.5 times higher than prescribed amounts in samples taken from SIPCOT project office.

Shweta Narayan, Coordinator, Community Environmental Monitoring, helped the villagers analyse the RTI data. “The data we used was made available by the TNPCB; we merely analysed them. The data revealed that groundwater is polluted with deadly metals such as cadmium, lead and chromium, which are carcinogenic agents. The villagers approached the TNPCB and also the government but no action was forthcoming,” she said. The next hearing on this case will be on September 29.