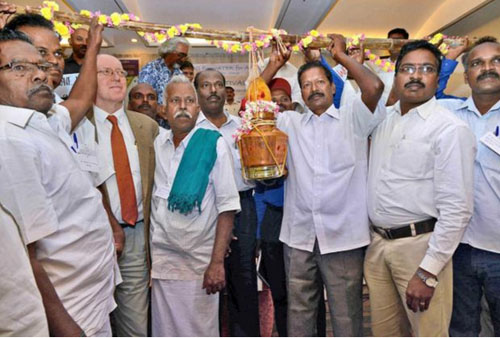 The ‘Neer Kudam’ will travel across Puducherry, Villupuram, Auroville and Cuddalore, where the water festivals are organised from Wednesday to March 22. Photo: Special Arrangement to The Hindu

A water festival with children as stakeholders inaugurated in Puducherry

School children will now get to know the environment and identify heritage sites in their region.

The Water Festival 2016 inaugurated on Tuesday in Puducherry will take them through the importance of water conservation by methods of puppet shows, theatre, exhibition and banner painting.

Children from nearly 41 schools falling within Puducherry, Villupuram, Auroville and Cuddalore (PVAC) bioregion will be involved in the water conservation campaign beginning from Bahour on Wednesday.

All for Water for All, a collective network of citizens and organisations, organised the inauguration of The Water Festival 2016 in Puducherry on Tuesday on World Wetland Day.

T.P. Raghunath of All for Water for All, said that the children are the primary stakeholders.

Nearly 25 schools in Puducherry region, four schools from each region including Cuddalore, Vaanur, Marakkanam and Auroville have been selected for the celebration of water festival.

The schoolchildren will involve in puppet shows and theatre.

Not just that, they would also be taken for a heritage walk around their villages and encourage them to clean small tanks in their surroundings. This festival is seen as a celebration of what we have now and an effort to bring together all positive forces for the protection, improving of water systems, its governance, sustainable use and augmentation, he said.

PVAC bioregion face a host of serious threat which are caused primarily by human activity that includes pollution, industrial and other waste, decreasing ground water level, conservation of agricultural lands, encroachment of water bodies due to population growth, salt water intrusion into groundwater due to coastal erosion and over extraction.

In order to address this issue, the Water Festival will also hold meetings with the local community and other stakeholders to formulate recommendations that would be submitted to the government.

Probir Banerjee of All for Water for All collective said that every region has general and specific problems.

“Through this festival, efforts would be made to identify the problems and provide solution to these problems. Subsequently, on the last day of the festival on March 22, recommendations based on this would be sent to the government, he said.”

Through this festival, efforts would be made to identify the problems and provide solution to these issues.

All for Water for All

Getting positive forces closer to save water