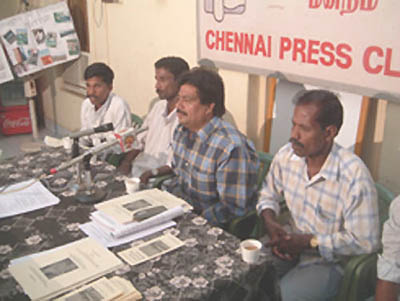 CHENNAI, May 9, 2005 — The air in Cuddalore SIPCOT chemical industrial estate is still not fit to breathe, concluded “Gas Trouble II: Air Quality Status and Assessment of TNPCB’s Compliance to Supreme Court Monitoring Committee Order,” a new report prepared by the SIPCOT Area Community Environmental Monitors (SACEM). A recent investigation by SACEM, that involved analysing four samples of ambient air taken using the “Bucket sampler” between October 2004 and March 2005, revealed the presence of 12 toxic gases, of which at least 7 seriously violated one or more of US standards for safe ambient air.

The samples were taken downwind of Tantech Agro Chemicals, SPIC Pharma and the Bayer-Arkema complex. Chemicals including Carbon disulphide, bromomethane, trichloroethene or trichloroethylene, 4-methyl 2-pentanone, acrolein, methylene chloride and hydrogen sulphide were found between 2 and 900 times above safe levels prescribed by various US standards. Worryingly, Trichloroethylene – a chemical known to cause cancer in animals tested in labs – was found in two samples taken downwind of Tantech by factors of 400 and 900 times above US Environmental Protection Agency’s (USEPA) Region 6 Screening Levels. Until ambient air quality standards for toxic gases are set by the Indian Government, the Supreme Court Monitoring Committee on hazardous wastes has ordered that US EPA screening levels should be used.

Odour monitoring and pollution patrols routinely conducted by SACEM also reveal no change in the pattern or intensity of odour incidents involving industrial emissions. Indeed, between October and April, 2005, at least five major incidents, involving SPIC, Tantech, Tagros and Tanfac, were reported to the TNPCB by SACEM.

SACEM contends that with less than two months to go for the June 2005 deadline, the TNPCB has taken no steps to curb air pollution. No air monitoring studies or mitigatory measures have been published or announced by the TNPCB.

“It is now more than half a year since TNPCB knows the kinds of toxic gases that SIPCOT residents are exposed to. Any delay in bringing down pollution levels in SIPCOT is tantamount to wilfully poisoning the people of SIPCOT to protect the industries. It is ironical that instead of curbing pollution and obeying the Supreme Court, the Tamilnadu Government is keen on setting up new polluting facilities in SIPCOT Cuddalore,” said SACEM.

SACEM has demanded that the TNPCB should make public the steps taken by it to comply with the SCMC order. They have also urged the Cuddalore Local Area Environment Committee and the TNPCB to begin comprehensive air quality monitoring using the expertise of the local environmental monitors and their bucket samplers, and initiate a rigorous time-bound program to reduce air pollution from the chemical industries.