Chennai, 28 July 2009: Fifteen women, including farmers from Mettur, demonstrated outside Chemplast Sanmar’s annual shareholders’ meeting holding on to pregnant-looking bellies to highlight that pollution from Chemplast’s factories in Mettur were harming future generations. The demonstrators distributed pamphlets and reports detailing the company’s environmental and social liabilities in Mettur to the company’s shareholders. Farmers and residents from Mettur and Cuddalore, where Chemplast has its plants, attended the demonstration. Meanwhile, one activist used a proxy share to attend the shareholders’ meeting and spoke above the objections of Chemplast managing director P.S. Jayaraman. He told the shareholders and directors that the company was operating its four Mettur factories without valid licenses, and that this violation was a prosecutable offence. He also pointed out that the Tamilnadu Pollution Control Board had stated in a June 2009 order that it would prosecute the Directors for the fraudulent act of underreporting the cost of its captive power plant in order to escape regulation. 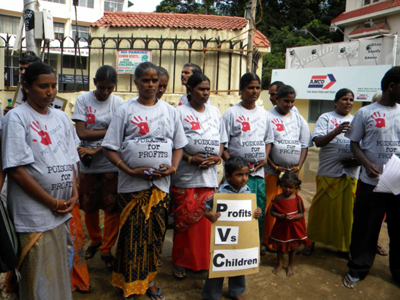 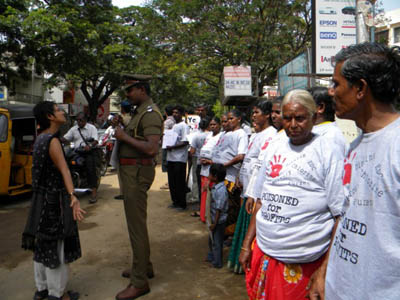 “Shareholders are often presented only with the rosy picture of growing assets and profits. Social and environmental liabilities are either hidden or downplayed. However, it is these liabilities that are often unquantifiable and that return to shortchange shareholders. Through this report we attempt to inform the shareholders of Company’s liabilities that they might not be aware of,” said G. Madeshwaran of Gonur West Agriculturists Development Union (GWADU). The report informs shareholders that such liabilities could exert a substantial material adverse effect on shareholder value.

According to the report, all four of Chemplast Sanmar’s plants are unlicensed, and are operating without the mandatory Consent to Operate under the Air and Water Acts. The company has also constructed a new coal unloading and storage yard with no Consent to Establish from the Tamilnadu Pollution Control Board. Separately, the company has falsified information submitted to the court and the Board regarding the cost of a contested 48.5 MW coal-fired captive thermal plant. To avoid the rigour of the EIA Notification, 1994, the company had underdeclared the cost of the Rs. 117 crore project as Rs. 45 crores. TNPCB has informed that it will take steps for “prosecution of Chemplast and the concerned directors/officers in accordance with the relevant statutory provisions.” While the company has been allowed to recommence construction on the thermal plant, a Mettur-based farmers organisation – the West Gonur Agriculturists Development Union — has contested the Board’s permission on grounds that the project invokes the EIA Notification, and that it will increase the pollution load in the area. A Tamilnadu Government Order prohibits the setting up of facilities that will increase pollution within 5 km of notified rivers such as the Kaveri. The company’s unlicensed operations and coal-yard construction too are prosecutable offences. 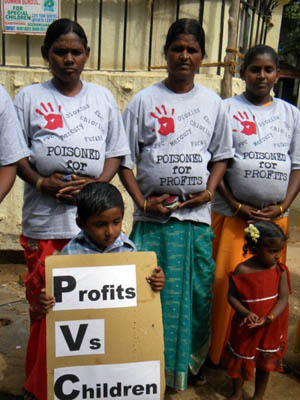 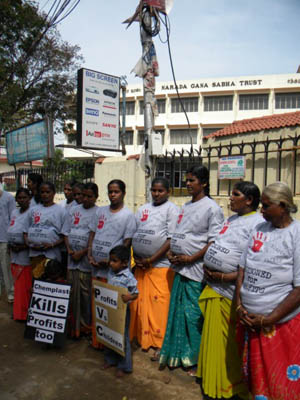 The report documents at least 21 hazardous incidents at Chemplast between 2004 and 2009, injuring 51 persons and killing two people, damaging property and resulting in massive fish kills since 2004. This points to a poor safety culture that could result in more and larger incidents that could impose a heavy liability on the company. Just in 2008-2009, the company witnessed 7 hazardous incidents, including four major gas leaks, altogether resulting in the hospitalisation of 18 people.

Among the six court cases and nine labour disputes pending against the company, three are prosecutions launched by the Factories Inspectorate for safety violations. More than a 100 Mettur farmers have filed a case in the Loss of Ecology Authority demanding compensation and remediation of groundwater and the contaminated environment. “Environmental remediation, particularly of groundwater is a big-ticket expense. Shareholders need to be ask their company to assess the damages, quantify the risks and prepare for it,” said Lakshmi Premkumar of Community Environmental Monitoring, Chennai.

Chemplast’s Annual General Meeting was held on 28 July 2009 in Chennai.