Mettur, 31.08.2012 : The Madras High Court on 28th August, Monday, has issued orders to the District Collector, Salem, and the Department of Environment and Forests, to launch immediate enquiry into the seriously polluted condition of Mettur region. Having admitted the public interest petition submitted by a Mr.Radhakrishnan of Salem, who is reported to be an environmental worker, the Court has instructed the concerned officials to act in haste. Following the order, it is understood that the Collector has convened a meeting on the 29th, to decide upon the course of action jointly with the Public Works Department, the Water Works Department, the Pollution Control Board, the Health Department, the Factories Inspector and the Revenue Divisional Officer, Salem. The RDO has announced that investigations and appropriate remediation will begin on Monday, to be executed by an expert committee.

Bringing to the Court’s knowledge the continuing critical poisoning of air, land and water in Mettur, the petitioner had appealed for undelayed intervention in such a matter wherein lives were at incumbent risk. For more, see attachment below : 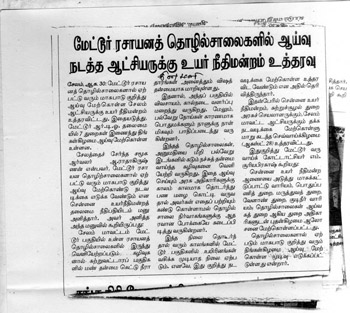 To view larger image of the order, click on the image above.