By Prasad, The Hindu

The blast that took place at a pesticides manufacturing industry, Crimson Organics, early on Thursday morning, also injured 10 others

In a major industrial mishap, four persons, three men and one woman, were killed and 10 others injured in a reactor vessel blast at a pesticides manufacturing industry in Kudikadu at the SIPC 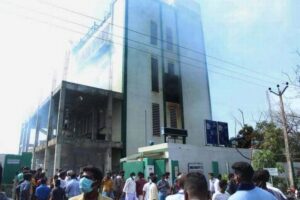 OT industrial estate in Cuddalore on Thursday. Sources said the blast took place at one of the reactor vessels in Crimsun Organics at around 7.45 a.m.

The deceased were identified as Rajkumar, 42, Ganapathy, 25 and Savitha, 35. The identity of the fourth victim is yet to be ascertained. The injured have been shifted to the Cuddalore Government General Hospital.

About 15 workers who were working in the unit were trapped inside. On information, fire tenders were pressed into service and rescue work was initiated by Fire and Rescue Services personnel.

Panic gripped the people of surrounding villages who came out of their houses following a deafening sound and thick smoke emanating from the unit.

“The industry manufactured chemicals, which are known to be toxic and have both environmental and health hazards. The incident occurred due to a neglect of safety norms,” said T. Arul Selvam of the SIPCOT Area Community Environmental Monitors (SACEM), an environmental watchdog.

A senior official of the Tamil Nadu Pollution Control Board (TNPCB) said that an enquiry had been ordered and they would be able to ascertain the exact cause of the blast after proper investigation.

According to Shweta Narayan, an environmentalist, “Cuddalore SIPCOT is an industrial disaster in waiting. On a daily basis, for the last 15 years villagers have recorded the slow-motion disasters that occurring in the place. The villagers have been pointing this out but unfortunately, this has fallen on deaf ears of the government and the regulatory agencies. There have been gas leaks, effluent discharges that poison the water and today’s accident does not come as a surprise,” she said.