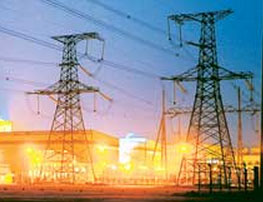 NTPC, the state-owned thermal power generation giant, might lose the chance to build its first ultra mega power project (UMPPs), as the government is likely to scrap the bidding process for the Cheyyur UMPP in Tamil Nadu. There is also a likelihood that bids for Odisha UMPP would also be shelved as NTPC and NHPC are the only bidders in race for it.

A bid evaluation committee headed by V K Shunglu, ex-Comproller and Auditor General of India would send its recommendations by January 5 to the ministry of power which would take the final call on both UMPPs. The bids for Odisha UMPP are to be opened on January 7.

In wake of other six potential bidders, all from the private sector, withdrawing from the race citing regulatory issues in the bidding format, officials said that the just one quote cant be accepted under Central Vigilance Commision guidelines.

“There has to be at least three bid quotes for choosing the final winner. Since, its a public sector undertaking that has remained in the race, the situation is even peculiar,” said a senior government official in the know of the matter.

The 4,000-Mw Cheyyur UMPP, worth Rs 25,000 crore, is to be fuelled with imported coal. Among the private players in the fray were Adani Power, CLP India, Jindal Steel & power, JSW Energy, Sterlite Energy and Tata Power. Of these, the only four that had bought the request for proposal document also decided not to go further in the bidding process. 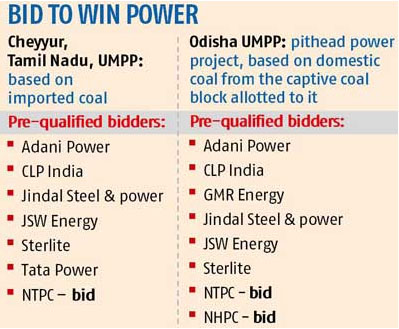 In earlier communications with the power ministry, the Association of Power Producers (APP)  of which the private companies named above are a part  had raised concerns over the (Design, Build, Finance, Operate, and Transfer) DBFOT model for the UMPP, and threatened it would not invest in the mega plan.

“To allay the stakeholders apprehensions, we will highly appreciate if you could consider coming out with a framework that serves the development aspect more predictably, and facilitating comprehensive review of Case-I and -II DBFOT documents. Until then, it will be appropriate not to proceed with competitive bidding of UMPPs,” APP had said in its letter to Power Minister Piyush Goyal.

The letter had also mentioned the companies would not be in a position to give viable and competitive plans if the concerns were not resolved satisfactorily.

“DBFOT does not apportion risk equitably. All losses go to the power generator and gains to the procurer, leaving the power producer as a contractor,” an APP official said.

Power Finance Corporation executed the bidding process and refused to comment on the matter.

Of the 16 UMPPs the previous central government planned to set up, four have been awarded – three are operated by Reliance Power (in Sasan, Tilayiya and Krishnapatnam) and one by Tata Power (Mundra). These projects had been awarded on a competitive tariff-based bidding and executed by a special-purpose vehicle.

NTPC the only bidder for Tamil Nadu UMPP – Govt to cancel bid as pvt companies pull out, final call on 2 ultra mega power projects by January 5