A landmark High Court verdict has ordered JALs illegally cleared thermal power plant in Himachal closed and levied damages of Rs 100 crore. But the local petitioners vow to continue the fight against the companys polluting cement plant which has got away 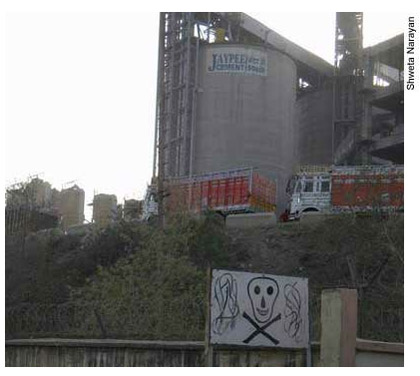 We are driving to Bagheri, now better known as the location of Jaiprakash Asscoiates Limited’s (JAL) ill-fated thermal power project in Nalagarh tehsil of Solan district in Himachal Pradesh. On  May 4, 2012 the Himachal High Court ordered that the part-constructed plant be dismantled, since the company, JAL, was guilty of indulging in ‘blatant falsehoods’ in acquiring the requisite clearances for this project. Many skeletons tumbled out of the closet as the green bench examined the illegalities, not just in setting up of the thermal plant, but also of a cement blending and grinding unit that the company has been running in Bagheri since 2010. The cement plant barely escaped the green bench whip, but a fine of Rs 100 crore has been ordered to be levied on the company as damages. The most critical aspect of the judgment, however, was the decision to set up a special investigating team to identify the government authorities and regulatory bodies that were complicit in the matter.

This was clearly a first in an environmental justice case against a corporation in India. The fact that a local group, along with the Bagheri Panchayat, was the petitioner in this case and that the villages around the area had opposed the thermal power plant tooth and nail, in not one but two public hearings, were all reason enough to call this a people’s victory. Then why, as we drove in to Bagheri village, was there a heaviness in the air?

The excitement that filled us as we approached the area died down as fine particles of dust rose up in the air and surrounded us.  Nobody was celebrating in Bagheri and there seemed little reason to. There had been a death in the village five days previously and we were promptly directed to the condolence meeting. Jeet Kaur, 50, died of asthma and her husband Baldev Singh is suffering from a cancer of the throat. Neelam Rana from the gathering of women in the house courtyard was quick to speak out, “Respiratory and throat problems, skin disorders and allergies have become common ever since the cement plant came to Bagheri”. It has been just two years since the plant has been operational and the impact of the dust is more than visible. “When we wake up in the morning, our throats are choked and we can barely speak,” added Neelam, an ex-BDC member, questioning why the court did not order the cement plant shut down.

Interestingly, Him Parivesh, a soceity of senior and concerned citizens working on environment issues in the Baddi-Barotiwala-Nalagarh Industrial area, who were the litigants in the Jaypee case, did raise the issue of pollution from the cement plant, praying for cancellation of the unit’s consent to operate. “We carried out an independent monitoring of the ambient air quality in November 2010 and the results showed that the pollution was way beyond the norms. We presented this report to the High Court as well,” said Balkrishna Sharma, secretary of Him Parivesh. The sample, tested and analysed at a US-based laboratory, with support from Community Environment Monitoring (CEM), a Chennai-based toxics watchdog group, revealed that the Jaypee Cement facility is a source of unsafe levels of particulate matter like manganese, mercury, nickel and cadmium. Studies have shown a significant association between exposure to fine particles and aggravation of respiratory and cardiovascular disease, lung disease, decreased lung function, asthma attacks, and certain cardiovascular problems such as arrhythmia, with older people and children being particularly vulnerable.

While the Pollution Control Board may easily refute the Him Parivesh report, it cannot trash its own findings from the samples taken around the Bagheri Plant in 2010 and 2011, which indicate violations of the standards prescribed by the Ministry of Environment and Forests. “The fact that except on one occasion in March 2011, when a show-cause notice was issued to the plant, all the other violations have been ignored or not acted upon reflects the lack of capacity and will in the Board to take action on violating units aggravating industrial pollution,” added Shweta Narayan of CEM.

The 94-page judgment of May 4, 2012 also does not mention pollution from the cement unit, as most of the observations revolve around the irregularities indulged in while obtaining and granting clearances. And yet in the concluding paragraphs the bench clarifies its position by stating that, “If this was going to affect JAL alone we would not have hesitated to pass such an order (to demolish the cement plant). We are sadly aware that if we pass such an order the livelihood of thousands who are totally innocent and not guilty like JAL will be adversely affected”.  There is a special mention of the truck owners and drivers in this context in the judgment.

This is why, in Bagheri we met Sheetal Singh from the village who has also invested in a couple of trucks in the area. He was apprehensive about the closure of the cement plant. “Each truckwallah has taken loans for buying the truck, we obviously are under pressure to keep the business running,” he admitted, adding that the impact of the dust on the health of the residents was a shared concern even in the truck union members. Tejinder Kaur, another vocal woman from Pandyana village, however, vouched for the fact that some of the truck owners would want the cement plant to be shut down “because any sane person would place the health of their family before money”. The women sitting around her nodded their heads vehemently to support her claim.

The cement plant may have been let off the hook for now, but the petitioners, Him Parivesh, are more than aware of the leverage the High Court granted them when it said “if it is brought to the notice of this Court that JAL is not complying with the conditions laid down by the EAC while granting environmental clearance or is guilty of causing pollution, we shall not hesitate to recall the aforesaid order and direct that the plant be closed down”. Locals continue to be sceptical whether this judgement would act as a deterrent and lead to improvement in the air quality around the cement plant. The ball is in the people’s court now and the company and Pollution Control Board have little choice but to clean up their act soon. As we leave the village, one thing becomes clear  the dust on this matter is far from settled.

Manshi Asher is a member of Him Dhara, Environment Research and Action Collective