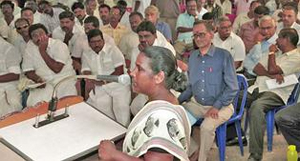 Residents at the public hearing conducted by TNPCB on the proposed expansion of the North Chennai Thermal Power Station at Vallur near Chennai. Photo: M. Moorthy

CHENNAI: Residents of several villages, fishermen of north Chennai and environmentalists vehemently opposed the setting up of Stage III in the North Chennai Thermal Power Station (NCTPS) at a public hearing here on Thursday.

The coal-based 1×800 Mega Watt super critical plant will cost Rs. 4,800 crore and will use the existing infrastructure facilities, including coal conveyors and cooling water channel of stages I and II.

The main reasons for the objections were air and water pollution, loss of livelihood and lack of infrastructure development.

Vijaya, a resident of Pulicat, said as part of an earlier rehabilitation package she had been given a janitorial job and she ended up getting skin ailments. “Every time a project comes to our area they promise jobs, but we only get menial or contract jobs and nothing permanent,” she said. Gunasekaran of Nettukuppam said hot water from power stations reduced the fish and prawn catch in the Ennore Creek. Kathirvel, a resident of Athipet, said people who had been relocated to Ennore Pudhu Nagar had not received pattas yet.

Civil society representatives, on the other hand, pointed out that the project violated several environmental norms. Coastal Action Network’s K.A. Mathiews said this project was in violation of the Coastal Regulation Zone. The proposed plant is near the Ennore Creek and Pulicat Lake, and along the route of migratory birds.

Members of Community Environmental Monitoring, an NGO, said the draft Environment Impact Assessment report was not in consonance with the Terms of References awarded by the Ministry of Environment and Forests.

Vehement no for NCTPS III