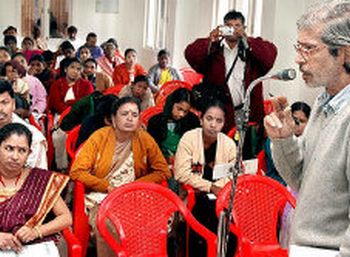 KODAIKANAL: The State Government must take a policy decision not to grant permission to start any industry that pollutes air, water and land on the hill stations.

This appeal was made by environmentalists, social activists and representatives of various non-governmental organisations at a consultation meeting held here on Tuesday on mercury pollution in Kodaikanal Lake caused by the thermometer factory.
An alternative drinking water source must be created for the town as several existing water sources such as Kodaikanal, Berijam and Kookal lakes were contaminated by mercury emissions from the factory.

The State Government must organise health camps at various places on the hill to identify people affected by mercury emissions.

The company must shoulder the responsibility and bear the costs of these activities, insisted Navroz Modi, environmental expert.

A study conducted by the Department of Atomic Energy confirmed that Kodaikanal Lake has been contaminated by mercury emissions.

He expressed fear that mercury contamination might even affect the people in plains, as those in Periakulam and Palani have consumed water originated on the hill.

We must propagate among people about the contamination of Kodaikanal Lake.

The company must be held responsible for damaging the health of people.

It is bound to repair and compensate.

Effect of mixing of lead with mercury was highly intensive and detrimental to human health, he warned.

Worst affected are children and women.

Kodaikanal Municipal Chairman S. Mohammad Ibrahim assured to take this sensitive matter to the notice of the Government.

Mother Teresa Women’s University Professor Kala appealed to constitute a technical committee to assess the actual damage done to environment and the effects of contamination on people.

Tamil Nadu Environment Council Convener L. Antonysamy warned that the silt removed from Kodaikanal Lake must be disposed of safely failing which the dumping area would also be contaminated by mercury.