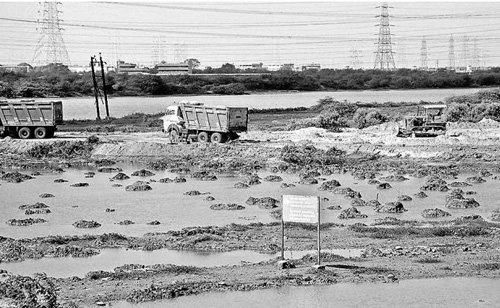 Fishermen allege that mangroves have been destroyed at Athipattu owing to works undertaken by Kamarajar Port Trust.Photo: B. Jothi Ramalingam

CHENNAI: Fishermen in Ennore took to the streets on Wednesday protesting against the destruction of mangroves in the Athipattu area by a contactor engaged by Kamraj Port Limited (KPL).

Coming as it does just weeks after the floods in Chennai, the fishermen claimed that mangroves were crucial for limiting damage during cyclones. Also, the vegetation attracts prawns, a major source of livelihood in the area.

According to A. Venkatesh, president of Mukadhwarakuppam Kadal Meenavar Cooperative Union, a sizeable area of mangrove vegetation had already been levelled by dumping rubbish. The activity was being carried out on behalf of the Port, he charged.

In late November, the Port faced similar allegations when activists claimed about 400 acres of hydrologically-sensitive wetland area was being dumped with the spoils of dredging as part of the Ports development activities.

In its response to the activists, the KPL, in a letter, said it had purchased land to the extent of about 683 acres adjoining the Ennore creek from the salt department.

…the dredged material has been dumped at low-level area at the south of North Chennai Thermal Power Station road where [exist] the land purchased from the salt department. It is informed that filling is proposed in KPL land only and not in the waterbodies, the letter said. It also assured the natural flow of the creek would not be disturbed.

However, Mr. Venkatesan disputed the claim and said the very fact that mangroves have been levelled shows that a very sensitive area has been filled.

This activity is also a violation of CRZ notifications. Our community will scale the protests up if this does not stop immediately, he said.