Chennai: Coal ash released by thermal power plants in Ennore may be polluting the air in Poes Garden and Boat Club, a study by The Coastal Resource Centre has found.

Members of The Coastal Resource Centre collected 24-hour air samples from 11 locations in Ennore, Manali, Kodungaiyur, Kattupalli and parts of the city last month. The samples were analysed in Chester LabNet at Oregon, USA.

The air samples collected from Boat Club and Poes Garden were had particulate matter of 104 microgram per cubic metre and 101 microgram cubic respectively.

As per the standards of United States Environmental Protection Agency, the two neighbourhoods have `unhealthy’ air. This is a matter of concern for children, senior citizens and people with heart or lung disease.

A Tamil Nadu Pollution Control Board (TNPCB) official said, “We are closely monitoring the emission levels around the thermal plants in Ennore to ensure there are no adverse effects.” 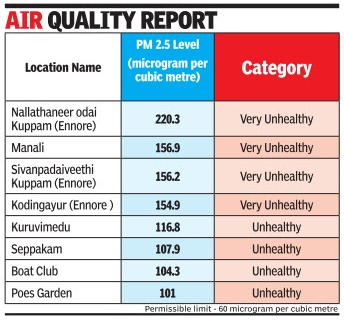