U Tejonmayam
Times of India 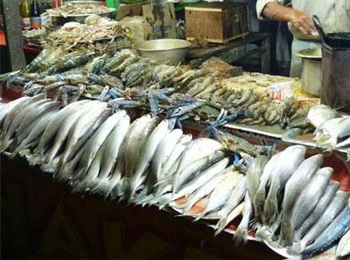 A study by Aquaculture Foundation of India and three institutions including Anna University have found concentration of heavy metals in the water and marine organisms in and around Ennore creek due to pollution from industries and domestic sources. (Representative photo)

CHENNAI: The seafood you eat could have toxic elements like mercury, arsenic, lead and cadmium, a study has found. Such heavy metals pose health threats that include cancer, lung infection and failure of kidneys and other organs.

A study by Aquaculture Foundation of India and three institutions including Anna University have found concentration of heavy metals in the water and marine organisms in and around Ennore creek due to pollution from industries and domestic sources.

The study published last year examined the level of eight metals in the water and five species that are eaten. The concentration was compared to that of permissible limits prescribed by the Food and Agriculture Organisation (FAO), an agency of the United Nations and the World Health Organisation. After finding the levels to be high, the consortium has initiated another round of investigation to take a closer look at nickel content in seafood.

Species like green mussel and tiger bass were found to have high concentration of mercury. Asian tiger shrimp found in Ennore creek was found to have up to 0.9 units of mercury as against the safe limit of 0.5 units. While the vastly consumed flathead grey mullet (madavai or kayal meen in local parlance) and Indian oyster had levels close to the prescribed limits.

The study points out that the liver and kidney of fish and shellfish tend to concentrate environmental mercury. “Marine organisms possess a capacity to turn inorganic mercury into organic compounds, thus rendering mercury more easily transferable throughout the aquatic food chain,” the study says. Earlier studies have also shown that fish consumption may constitute an important sources of mercury exposure for health.

All the five species of Asian tiger shrimp, green mussel, Indian oyster, mullet and tiger bass had high cadmium concentration; shrimp had the highest level of 19.25 units (microgram per gram) against the permissible limit of 0.05 to 5.5. The study shows that bivalves accumulated higher proportions of copper, chromium, nickel and arsenic in Ennore creek than shrimp, grey mullet and tiger bass.

Previous studies had found concentration of metal in seafood was significantly higher during summer than monsoon. Urban runoff, sewage, industrial effluents and domestic waste contribute to the problem. Aquaculture Foundation of India scientist M Jaikumar said the concentration of heavy metal deposits are high around the railway bridge at Ennore creek, compared to four other points- Ennore thermal plant, river, estuary and opening of the effluent from the thermal plant. 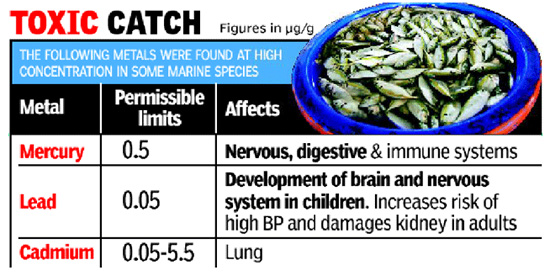 “Heavy metals get deposited in the river because of lack of proper dredging. The mouth of the estuary is dredged to about five metres, while the depth near the railway bridge is only about 1.5m,” he said. “Dredging has to be done up to 5m, and to a length of about 5km.”

In the name of development you just cannot keep on polluting the rivers and cut down the jungle. Eventually mother natur… Read More
Vagabond

Jaikumar said they are now studying nickel bioaccumulation in tissues of four marine species: Mullet, crab, oyster and polychetae, a worm used as a feed in shrimp hatcheries. “Polychetae in particular are pollution indicators as they grow in polluted water. At Ennore creek, more than 900 people make a living by fishing for polychetae and selling them, though it is banned by the government.” he said.

National Institute of Ocean Technology has also conducted studies at Ennore creek that showed the biochemical oxygen demand and fecal coliform levels are beyond the assimilative capacity of the water body. “It was found during the comprehensive field study that the biggest contributor was untreated municipal sewage from Buckingham Canal,” said an NIOT scientist.

The study further examined the possibility of offshore discharge of untreated municipal sewage for a projected load of the year 2020. Scientists from ICMAM are working to come up with permissible limits for heavy metal in sea water as there are no standards in the country.