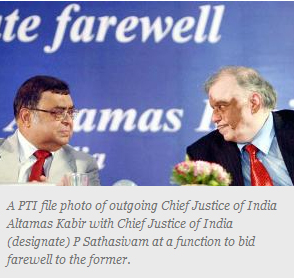 NEW DELHI: In an unprecedented development, a bench headed by Chief Justice P Sathasivam strongly disapproved of a series of orders passed by a bench headed by his immediate predecessor Altamas Kabir granting relief to Jaiprakash Associates Ltd (JAL) by virtually sitting in appeal over the order of another bench of the apex court which had declined to give concession to the construction and infrastructure group.

The orders passed by the bench headed by the ex-CJI helped the company dodge depositing Rs 100 crore as penalty that Himachal Pradesh high court had slapped on it in May last year for misrepresenting facts for securing clearances to set up a cement plant.

While an SC bench headed by Justice A K Patnaik in November last year refused to stay the HC order and asked the company to meet the deadline for depositing the penalty, the bench led by ex-CJI Kabir passed orders enabling the company to defer paying the fine, before staying the HC order.

“We do not approve of the manner in which the interim orders came to be passed. We do not sit on appeal over orders passed by a coordinate bench. These orders should not have been passed,” a bench of CJI Sathasivam and Justice Ranjan Gogoi said on Wednesday as it rejected JAL’s plea for extension of deadline for payment of Rs 25 crore as this year’s installment for the Rs 100 crore penalty.

Despite senior advocate A M Singhvi making attempts to defend JAL, the bench of Justices Sathasivam and Gogoi made no secret of its strong displeasure over the manner in which the matter had been taken up and interim orders passed, which were in direct conflict with earlier orders of the apex court.

“We are clear in our mind about what has happened,” the bench said when Singhvi alleged that Sanjay Parikh, the counsel for the NGO which challenged JAL’s cement plant, was trying to confuse the matter by referring to different orders.

Appearing before Justices Sathasivam and Gogoi, Parikh narrated the sequence of orders and wondered whether the ex-CJI headed benches could have sat in appeal over the orders passed by a coordinate bench.

On May 4 last year, Himachal Pradesh HC slapped a fine of Rs 100 crore on JAL for misrepresenting facts to obtain statutory permissions, including environment clearances, for setting up a cement plant. Applying the ‘polluter pays principle’, the HC bench of Justices Deepak Gupta and Sanjay Karol had asked JAL to pay the fine in yearly installments of Rs 25 crore each on August 31, 2012; March 31, 2013; March 31, 2014 and March 31, 2015.

The company had challenged the decision in the Supreme Court. JAL’s appeal was heard by a bench headed by Justice A K Patnaik, which on November 26 last year admitted the appeal but rejected the request for a stay of the HC judgment.

The Justice Patnaik-headed bench said in its order, “On the prayer for stay of the damages of Rs 100 crore ordered by the high court, we are not inclined to grant stay of the said order. The petitioner is, therefore, directed to deposit the damages in installments as per the impugned order of the high court. We, however, direct that the damages deposited by the petitioner will remain with the state and will not be disbursed during the pendency of the appeals.”

On February 4 this year, the matter was listed for the first time before a bench headed by then CJI Altamas Kabir and comprising Justices A R Dave and Vikramjit Sen. The bench in its order said, “Having regard to the very frank submissions made on behalf of the petitioner regarding its incapacity to deposit the penalty amount, out of which one installment has already been deposited, let this matter be listed for final disposal on March 12.”

On March 12, it was adjourned to March 19 and then to March 20, when a bench of Justices Kabir, Dave and Ranjana P Desai said, “Since this adjournment is being given at the instance of the state of Himachal Pradesh, the time granted by the high court to deposit Rs 25 crore within March 31, 2013 shall stand extended till April 20, 2013.”

On April 17, the bench of Justices Kabir, Dave and Sen read the order extending payment deadline to April 20 as an interim order and continued it till May 8. On May 8, the bench of Justices Kabir, Dave and S A Bobde adjourned hearing till second week of July and read the interim order as a stay and clarified that such a stay would continue till then.

Just a week before retirement, Justice Kabir, who headed a bench comprising Justices S S Nijjar and J Chelameswar, on July 10 cited paucity of time for its inability to take up the matter and adjourned hearing on JAL’s petition till July 23 but added that “till then the payment of installment shall continue to be deferred”.