Chennai: The state government received a boost in its efforts to monitor air quality in industrial clusters, with the Central Pollution Control Board giving the nod for setting up real time air quality monitoring stations at five locations in Cuddalore and Mettur. The project will be implemented in the two regions known to be polluted industrial belts, under CPCB’s nationwide national air quality monitory program.

The move comes in the wake of frequent complaints about the highly-polluted industrial clusters of the staterun SIPCOT. While assessing the quality of air in 2010, the CPCB study revealed that Cuddalore was highly polluted with an environmental pollution index (CEPI) score of 77.45. Any industrial cluster with a score of 70 and above is considered critically polluted and this even led the Union ministry of environment and forests to impose a moratorium on new industries in 2010 in Cuddalore. The state pollution control board was directed not to grant licenses for new industries in the region. Cuddalore was rated 16 among the polluting 88 industrial clusters in the country. “CPCB has taken up the cost estimates of the stations and is likely to issue orders for tendering,” said asenior government official.

The main objective of the programme is to ascertain whether the prescribed ambient air quality standards are violated, and to take preventive and corrective measures. Four air pollutants, sulphurdioxide, oxides of nitrogen, suspended particulate matter and respirable suspended particulate matter will be monitored real-time. “It’s a welcome move. This is the first step in monitoring the air in this belt. But it will be of no use, unless the community is kept in the loop from the beginning right from selecting the location for installation of the samplers to the monitoring,” said Swetha Narayan, coordinator of an activist group Community Environment Monitoring (CEM). 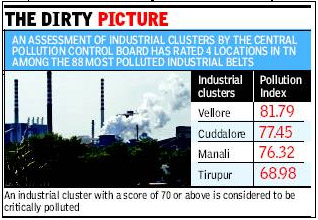 Stations to track air quality in TNs most polluted belts