REGULAR MONITORING OF POLLUTION BY LOCALS TO CREATE PRESSURE ON PCB AND VIOLATORS’; Him Parivesh, Environment Protection Society 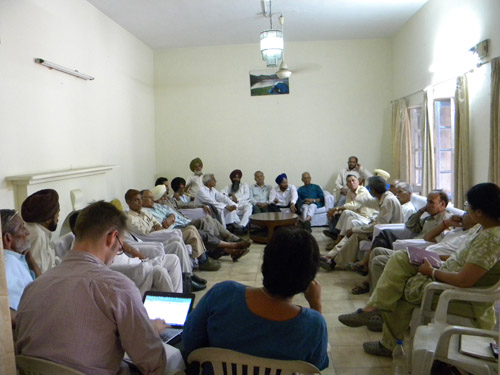 Him Parivesh Environment Protection Society today convened a meeting under the leadership of Jagjit Singh Dukhiya to discuss matters related to gross violations of Pollution related norms in the Baddi Barotiwala Nalagarh Industrial Area. Specifically referring to the severe dust pollution by Jaiprakash Associates Limited’s cement grinding and blending unit, Dukhiya said, “Despite the High Court Judgement on the company, the project is continuing to pollute the area and there is massive toxic dust in the air, especially early in the mornings”. In this context, Him Parivesh has ddecided to carry out regular monitoring of the air quality and suspended particulate matter with the help of the local people. Taking support from Community Environmental Monitoring, a Chennai based toxics watch-dog group, Him Parivesh will keep track of the pollution levels and submit regular reports to the government as well as the High Court of Himachal. “We think that the Pollution Control Board has neither the will nor the capacity to monitor the pollution levels in the area” added Shweta Narayan of CEM, Chennai.

“Infact we will track the water and air pollution levels in the entire BBN region and in 6 months time release a detailed State of the Environment report to expose the negative impacts that the rapid uncontrolled industrial growth has had in the region” added environmental activists, Rahul Saxena and Manshi Asher, who were also present in the meeting. Other members of Him Parivesh added that the ‘single window clearance’ mechanism is a corrupt system of approving industrial set ups and there is no transparency on the nature and capacity of the investments. Citing the Jaypee example, they said that the real investment details are revealed only after the plant becomes operation and by then it is too late to take action.

Targetting the Pollution Control Board, Laxmi Singh Thakur, Vice Chairman of Him Parivesh said that “the board merely issues show cause notices like empty threats and never follows up with closure or court action” on firms violating environmental norms. The group also pointed out that the Supreme Court order of 2003 on declaration of Hazardous Chemicals and Wastes on boards displayed outside factory premises stands grossly violated in the BBN Area. Him Parivesh has resolved to compile information on all companies violating this order and making a submission to the Supreme Court in the matter.