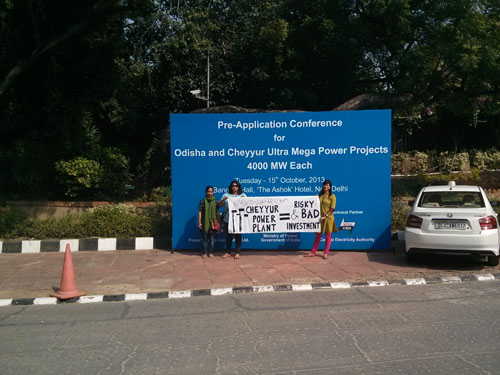 15 October, 2013. New Delhi  A pre-application Conference organised by Power Finance Corporation for potential bidders for the Cheyyur and Odisha 4000 MW UMPPs witnessed numerous questions on the risks associated with the alleged fraud by PFC, its consultants and officials of the Environment Ministry in facilitating clearances for the project. Prospective bidders were warned that the 4000 MW Cheyyur Ultra Mega Power Project was a risky proposition as the clearances for the project were facilitated by fraudulent statements and false evidence. A coalition of social activists handed out a “Dear Prospective Bidder” letter at the sidelines of a Pre-application conference organised by Power Finance Corporation (PFC) at The Ashok Hotel, New Delhi, highlighting the risks in the project. The letter stated that “The 4000 MW Cheyyur UMPP is unlikely to materialise” and that “The entire site selection and impact assessment processes are fatally flawed as they are based on fraudulent statements and incomplete analyses.” The letter also highlighted an October 3, 2013, order of the National Green Tribunal, Chennai, that restrained PFC from finalising any bids for this project pending the outcome of the court cases. In response to a question on the court injunction, PFC assured bidders that the order will not hinder the process in any way.

The letter which sought to make potential bidders “fully conversant” with the risks associated with this project included a report released in Chennai in September 2013 that documented a dozen “chosen” fraudulent statements used by PFC and its consultants in justifying port licensing and environmental clearances for the project.

PFC has claimed that the project is coming up on barren, undeveloped land with minimum agriculture, and denied the presence of ecosensitive features in the project vicinity. Activists said that even official documents belie these claims. Expert Appraisal Committee meeting minutes from the Environment Ministry note that 82 percent of the site area is agricultural land. The port and a coal storage yard will come atop a healthy sand dune, while the coal conveyor belt and a proposed storm water drain will cut across several dune formations. The power plant and ash pond are bound by the Mudaliarkuppam and Alhambrai estuaries to the North and South. These waterbodies are dotted with mangroves and seagrass beds. Mangroves, seagrass, estuaries and sand dunes are all identified as “ecologically sensitive” in the Coastal Regulation Zone Notification, 2011. Both estuaries are important feeding grounds for migratory birds, including near threatened species like spot-billed pelicans.

In its application for CRZ clearance, PFC had claimed that there are no scarce resources like “surface water or groundwater” in the vicinity of the project. According to Tamil Nadu Public Works Department, Cheyyur Taluk has 82 lakes (eris) capable of storing 3500 crore litres of water and irrigating more than 16000 acres. In fact, revenue records reveal that more than 100 acres of waterbodies, including tidal-influenced backwaters, will be acquired for the project.

Given the hydrological and biodiversity importance of the project site, several vigilant citizen groups from Pondicherry and Tamil Nadu are already engaged in the task of collecting baseline environmental quality information, with a view to continuously monitoring the environmental quality. “Any potential bidder must also consider the inevitable risk and exposure arising from lawsuits for loss and restoration of ecology,” the letter warned.

Visit: cheyyur.wordpress.com (Report can be downloaded from the blog’s “Resources” section.)

Read the letter to investors.