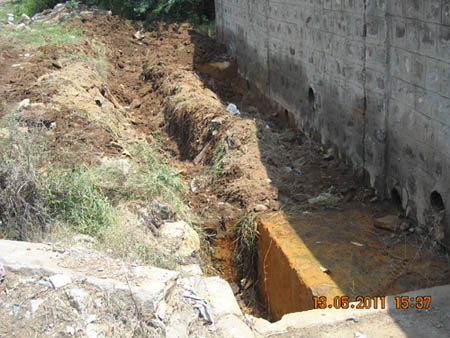 25 May, 2011, METTUR — An earth-moving machine, admittedly working for Chemplast Sanmar, was found excavating the silt from the side of the compound wall of its Plant II at around 9.30 a.m. on 24 May, 2011. When questioned by Gonur West Agriculturists Union (GWADU), the operator of the earth mover said he had been asked to create a channel away from the compound wall of the factory because effluents that flowed through the existing channel were mistakenly attributed to Chemplast. On 4 May, 2011, farmers belonging to GWADU had complained to the Tamilnadu Pollution Control Board about the discharge of foul-smelling and visibly polluted water along the factory wall, and attributed it to seepage of untreated effluents from the factory following rainshowers the previous day. The company denied claims of illegal discharge stating that it runs a zero discharge facility. The results of a sample taken by Community Environmental Monitoring of the discharge on 4 May is awaited, and will likely be available within a week.

Excavation of public lands and diversion of water courses by private parties without permission is a criminal offence. Within minutes of being questioned, the operators of the earth mover stopped work and returned to the factory leaving behind a partially excavated channel. GWADU has filed a police complaint and a complaint with the Tamilnadu Pollution Control Board about the incident.