The direct discharge of untreated toxic sludge into a stormwater drain in Echangadu located in the Cuddalore SIPCOT industrial estate that empties into the Uppanar River, has kicked up a controversy with local residents and environmentalists expressing serious concern over the continuing pollution levels and water quality.

Residents of Echangadu said that they noticed the discharge of untreated waste into the stormwater drain a few days ago. Constructed for the purpose of discharging excess rain water run off during the monsoon, the drain has, for the past few years, been carrying untreated effluents and toxic sludge discharged directly by pharmaceutical and chemical industries in SIPCOT, said G.K. Amirthalingam, a resident of Echangadu. 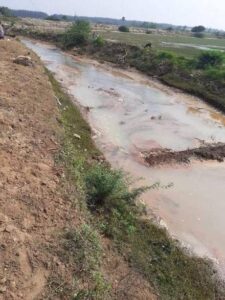 He alleged that the pollution had now reached alarming levels and the waste was flowing through both sides of the drain. The water in the drain has turned green and black in a few places. A foul smell has been emanating from the area, he said.

Members of the environment watchdog SIPCOT Area Community Environmental Monitors (SACEM) have also lodged a complaint with the Tamil Nadu Pollution Control Board (TNPCB) seeking action against the units.

SACEM charged that effluents from three other industrial units that drained through another canal flowing in the north to south direction also joined the Echangadu canal before draining into the Uppanar.

“For the most part, the Echangadu canal is located close to the compound wall of a pharmaceutical unit that has remained closed for years now. This has triggered suspicion that untreated and hazardous waste buried within the premises of the closed industry could have been illegally discharged into the Echangadu canal,” SACEM said in a complaint to the District Environmental Engineer of TNPCB.

Though repeated representations have been made to authorities concerned there seems to be no end to the menace, SACEM said.

According to S. Pugazhenthi, former member of the Local Area Environment Committee, “The discharge of untreated effluents could impact and threaten the livelihood of local fisherfolk who depend on the Uppanar and Paravanar Rivers for fishing. An intensive drive should be held to track those recklessly discharging effluents or covertly engaging in activities resulting in water contamination.” Apart from slapping hefty fines, action should be initiated against the polluters under the provisions of the Water (Prevention and Control of Pollution) Act, 1974 and the Air (Prevention and Control of Pollution Act), 1981, he said.

A senior official in the TNPCB said that the Board had taken cognisance of the complaints and water samples had been lifted from the site.

Most of the industries in SIPCOT have Zero Liquid Discharge treatment facilities. The sludge from a closed pharmaceutical industry is suspected to have been released into the canal. A probe is underway, the official said.

According to T. Arul Selvam of SACEM, a report of the Comprehensive Pollution Control Index (CEPI) submitted by the Central Pollution Control Board to the National Green Tribunal (NGT) shows that no tangible measures have been taken to bring down pollution levels in Cuddalore SIPCOT. While there has been a slight improvement in the pollution levels of land and air over the years, there has been no improvement in the water quality, he added.

By S. Prasad
The Hindu