Posted in updates By sacemPosted on December 11, 2020

Cuddalore 2 December 2020: Cuddalore had heavy spell of rains during and post Nivar cyclone. Rains are either boon or bane in several ways to the public but to industries rains seem an opportunity to discharge effluents illegally. SIPCOT area community environmental monitors suspect mixing of unsafely stored chemicals or wastes with storm water and illegal discharge of effluents along with storm water by two of the industrial sources identified by them.

On 2nd of December, SIPCOT area community environmental monitors during their pollution monitoring patrol identified two of the SIPCOT complex industrial sources- Clariant chemicals’ new plant 2 (name board isn’t available) and Asian paints that seemed to either have handled/ stored chemicals or wastes unsafely leading to washout with storm water or illegally discharge waste or effluents along with stormwater.

The monitors report that black oily films float along with storm water that’s flowing from the inside of the Clariant chemicals’ new plant 2. 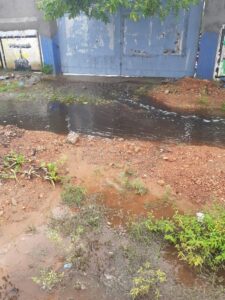 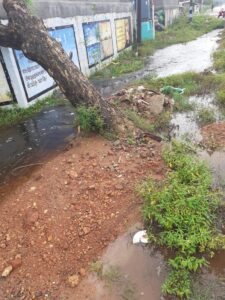 The SACEM monitors also report that dust and black particles mix with storm water that’s flowing from inside of Asian paints industry. These drain through the storm water drains and ultimately reach Uppanar/Paravanar River that could cause severe pollution of the water body. 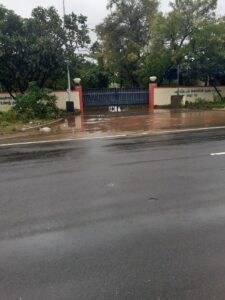 The SACEM monitors have made a complaint along with photos on suspicion of illegal discharge of effluents, unsafe storage of chemicals or waste for both of these observations to the Director, Department of Environment, District Collector and JCEE, DEE of TNPCB, Cuddalore demanding regular monitoring of handling, storage of chemicals; waste and effluent discharge strictly pre- heavy rains/ flooding situations and to take immediate regulatory action against violators.