Skip to content
Posted in Media Stories, updates By sacemPosted on November 7, 2005November 21, 2020

Sarvanan and I visited the accident site of the Orchid Chemicals and the neighbouring Alathur village at 11:30 am on 4 November 2005.

Report from outside the plant:

According to the workers outside the plant the accident took place in the phase 24 of the plant (a chemical recovery unit) at about 8:35 pm on 3 November 2005. Two boilers in the unit exploded and caught fire. The flames from the fire were reportedly about 100 meters high. Twenty fire engines arrived at the accident site approximately after the incidence and managed to doused the fire by midnight. The workers on the site said that 30 people were working in the unit at the time of the accident. 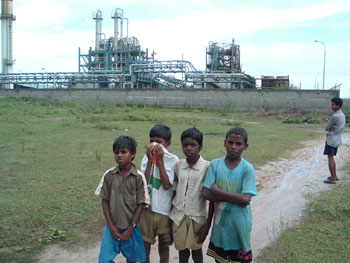 Children around the unit told us the stories of the accident and the explosion.

The company’s report to press states 2 dead and three injured as opposed to the local resident’s reports of 5 dead and 12-13 injured. Intriguingly, injured workers were admitted to different hospitals in the district like the Chengalpatu Government Hospital and Sankara Hospital. The window panes of neighboring buildings were shattered due to the impact of the explosion. Heavy metal beams from the unit (each weighing upto 300 kgs) were found scattered in the adjoining land about 75 to 100 meters away from the plant. A company official in his interview to The New Indian Express described the fire and explosion as a “minor accident”. 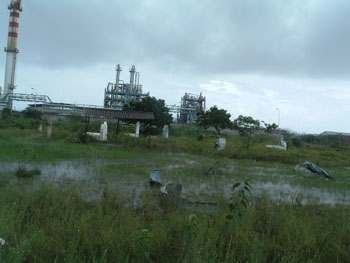 According to the community members accompanying us most of the contract workers were not local residents but were from Karnataka, Andhra Pradesh, Uttar Pradesh, Gujarat and Punjab. The police security around the area was beefed up and the workers that were interviewed refused to reveal their identity.

Alathur is a small village about 300 meters from Orchid Chemicals. The 1500 odd residents of the village were very scared after the explosion and fled their houses fearing further blasts and returned only in the morning. Individuals who witnessed the accident reported clouds of white smoke and a overpowering acidic odour. The odour lasted for about 3 hours after the incident and people experienced severe eye and throat irritation. We noticed a strong nauseating fruity odour around the unit in the morning during our visit. Upon enquiry it was reported that similar odours were very common and that the intensity of the odours was very high in the nights. E. Mohan a resident of the area showed his house that had developed cracks. There was no warning from the unit and the management did not inform the people about the cause of the explosion. As a result some of the residents gathered outside the plant immediately after, demanding information about the fire. The police arrived at about 9 pm and there was a lathicharge to disperse the crowd. No information from the company was provided even the next day to the people in the village.

Accidents in Orchid plant and other plants in the area were a regular feature. Three months ago one unit in the Sanmar plant in the same industrial estate had exploded. According to the local reports this was the fourth major accident in the Orchid plant in last three years, similar accidents have taken place in 2001 and 2003 too. About six months ago a contract worker was injured in the plant and his leg had to be amputated. About two months ago one more contract worker died inside the plant due to a fall from a tower. Some of the contract workers from the village who have worked inside the plant reported that the safety systems in the plant were almost non existent and none of the contract workers were provided with protective gears or were trained to do the job. The residents also complained that the company has dumped hazardous waste on the surrounding land and in the Buckingham Canal and as a result the agriculture and the ground water in the area is totally destroyed. 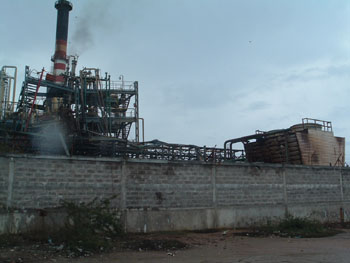 The scene of the explosion in the Phase 24 Unit

Chennai: An explosion at Orchid Chemicals pharmaceutical factory in Alandur, 45km from Chennai, has killed 1 person and injured 2 to 3 persons.

Information at 12:30 am 04/11/2005 – Deputy Superintendent of Police office, Kanchipuram
According to the office of the Deputy Superintendent of Police, Kanchipuram, the information of the explosion was reported to the police at 9 pm on 3/11/2005, shortly after the incident. The officer described the incident as a steam boiler explosion that led to spill of purified acetic acid and other bleaching agents inside the factory premises. One person was charred to death and was beyond identity at the time. About “2 to 3 persons” are reportedly injured, and have been admitted to the Sankara Hospital in Perumbakkam. The officer also mentioned that a building in Phase 24 of the plant has also been partially damaged due to the force of the explosion. There were reports of fire after the explosion but the fire was controlled by the fire engines.

Local residents reported at 11 p.m. that the explosion was felt all the way to Mahabalipuram, about 10 km from Alathur. Fenceline communities living in Paiyalur and Vengaleri reported damages to their television screens due to the explosion.

Information 1:00 am on 04/11/2005 – Sankara Hospital, Perumbakkam
A staff nurse at the emergency unit of Sankara Hospital confirmed that two Orchid workers Muthkumar (35) of Thangaraj Nagar in New Perungalathur and Mr. Suresh (21) from Kambar Nagar, Thiruporur — were admitted to the hospital late in the evening by a co-worker. Both workers were reportedly working in the control room and were injured by the glass that splintered as a result of the explosion. The nurse said both workers are serious; Muthukumars condidion is reportedly very serious because of loss of blood.

There was no gas leak reported either by the police or residents, and no complaints of odour or chemical-related discomfort outside the factory. However, the force of the explosion has left people shaken.

Orchid Chemicals is the recipient of CIIs Leadership & Excellence Award in Safety, Health, Environment and Manufacturing in 2002. The ISO 14001 Company is the recipient of several awards given by industrial associations, including an MS Swaminathan for world class Environmental Management Systems award in 2003.

Report from the accident site of Orchid Chemicals & Pharmaceuticals Ltd. Plant in Alathur