Cuddalore, 13 January 2007: Residents of Periyapattu village, about 20 kilometres from the infamous SIPCOT industrial estate, have opposed the proposed SIMA textile park citing reasons of pollution, groundwater depletion and damage to the local agricultural and the fishing economy as reasons against the proposed water-intensive dyeing and bleaching industries. They demanded the government to scrap all proposals for setting up polluting industries in Cuddalore. Instead, they said the Government should promote non-polluting industries that add value to the local agricultural and fishing produce.

They have asked that the lands acquired for the textile park should be redistributed among landless farmers under the 2-acre scheme. The DMK state Government had made an election promise of giving 2 acres of land to each landless family.

The Rs. 500 crore SIMA park that is set to come up on 450 acres of fertile agricultural lands in Periyapattu panchayat involves seven major companies that will set up textile dyeing, bleaching and printing facilities. Textile dyeing is water and pollution intensive. The units will suck out 10.95 MLD (million liters per day) through 12 borewells at 1000 feet. Roughly 10 million litres of toxic effluents will be returned to the environment via a 3.5 km pipeline that empties into the sea.

Textile units are notorious for their pollution. In Tiruppur, nearly 800 textile units that operate, have killed the river Noyyal, filled the Orathupalayam Reservoir with effluents, and damaged groundwater and agriculture as far away as 50 km from the source of pollution. Cuddalore villagers also condemned a proposed scheme to pump Tiruppur’s effluents to sea in Cuddalore.

The SIMA park is set to come up on cashew, casuarina and agricultural lands characterised by sand dunes. 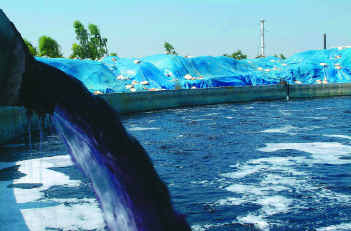 A common effluent treatment plant in Tirupur by the Noyyal.

The pile-up of sludge is stacked alongside. Photograph by K. Ananthan

The residents showcased the example of poor environmental conditions in the nearby SIPCOT Phase I and II and expressed fears of a similar situation if the proposed park was set up in their area. The residents also felt that not only will the proposed units takeover fertile agricultural lands but will also destroy the productivity of the neighbouring areas as well.

Residents also condemned the proposals of setting up a PVC plant, thermal power plant, ship building yard and a marine pipeline for the disposal of effluents of the notorious textile units of Tiruppur. The residents made it clear that any proposal that take up agricultural land, pollutes groundwater, air or the sea and robs fisherfolk of their livelihood is not acceptable to them.