Gummidipoondi, 17 April 2005: About seven hundred people, including six hundred women and about hundred men, came out on the streets of the Gummidipoondi town to show their opposition to the proposed Hazardous waste landfill in the area. 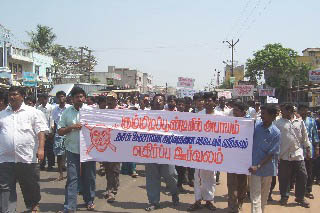 Residents take it to the streets to oppose the Toxic waste landfill.

The main demand of the residents was to withdraw the proposal of setting up of hazardous waste landfill in the SIPCOT industrial estate of Gummidipoondi. The rally started from Rettambedu junction of Gummidipoondi town and culminated at Aruna Kalyanam Mandapam, where a public meeting was held to discuss the problems with the proposed project and ways to take the campaign against the project forward.

All the speakers at the public meeting spoke about the high quality of groundwater in Gummidipoondi.

K. Sudhakar of Toxics Link was the first speaker who explained the concept of the landfill to the audience and also described the dangers of the technology like incinerator, which was being proposed in Gummidipoondi.

S. Ramanathan of SIPCOT Area Community Environmental Monitoring (SACEM) was the next person to speak. He explained the impact of industrial pollution in Cuddalore. He mentioned that in Cuddlaore, the industries had made a lot of promises before they set up their facilities, but over the years they broke all their promises and turned Cuddalore into a toxic disaster. He also mentioned that land, agriculture, fish and human life in Cuddalore has been spoilt and how it was so difficult to control the industries after twenty years of poisoning the environment. 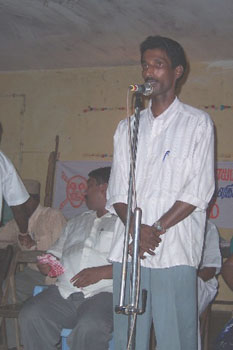 Kalyani from Tamil Nadu Women’s Collective was the next person to talk. She explained to the women the importance of their participation in the entire struggle. She also urged the women to explain to their friends, family and relatives about the rally and reasons for opposing the landfill and gather more support and strength for the campaign.

R. Udayshankar of Universal Human Rights Organisation, New Delhi, explained the health effects of hazardous waste landfill on the residents and also mentioned that this issue should not only be opposed from the environmental perspective but from the human rights perspective too.

V. Tamizhselvi of Grama Penngal Munnani (Village Women’s Front), Thiruvallur spoke about the impact of the landfill on the groundwater and the importance of women’s participation in the campaign.

Padmanabhan of Pasumai Thaigam extended solidarity support to the residents of Gummidipoondi and urged the people to ensure that no polluting or toxic project comes in the area.

Selvaraj, Panchayat Union Chairman of Gummidipoondi ensured to the people that the Panchayats would not allow the project to come up in the area. He mentioned that the Panchayats are against this polluting project and, the company, though may try every thing, does not hold a chance to set up their facility in the region.

Rajsekharan, Panchayat President of Natham appreciated the overwhelming response of the women and highlighted on the importance of women’s participation in the campaign. He assured that when people unite, destructive projects like the landfill will not have a chance to come up. 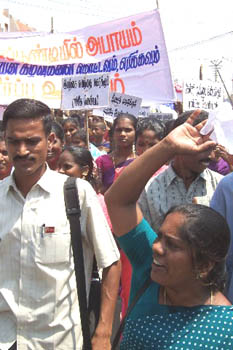 Women at the forefront in opposing the toxic proposal.

Tulasinarayanan of Centre for Indian Trade Unions (CITU) highlighted the fact that SIPCOT is located on land that was forcibly acquired by the villagers. He mentioned that the strength of the local people lies in their unity and it manifested a few years ago in the people’s unanimous opposition to the Thapar Du Pont project. He mentioned that at the time of fighting the project the people were united, and maintained high levels of integrity. It was because of their combined resolve that even the vehicles of the company were not allowed to enter the villages. This eventually resulted in the defeat of the Du Pont proposal from the area. He added that the people of Gummidipoondi have proven that they can even drive Multi National Corporations away and that they can repeat their success with preventing the company to set up the landfill in the area.

Residents rally for their land and water, say No to Toxic Waste Landfill