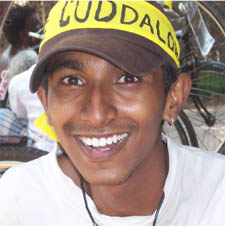 “Even if I am not around, I would want the message of environmental pollution to reach as many people as possible”
Gurubalan (1986-2006)

In November 2006, a collective of youth from Chennai embarked upon a cycle rally from Cuddalore to Chennai to observe the 22nd Anniversary of the Bhopal Gas Tragedy. The rally raised awareness about the appalling levels of pollution in SIPCOT Cuddalore and other pollution hot-spots in the region among the people along the way during the 300 km journey.

Gurubalan, a student and one of the most enthusiastic volunteers died in a tragic accident during this rally. The rally paused, but resumed after a few days. The spirit never died, it was only stronger now!

This scholarship is instituted to inspire young people in memory of Gurubalan, his zeal and commitment towards environmental issues.

Films can be in Tamil or English. Duration up to 20 minutes.

Rights to the film will rest with the director(s) and/or persons involved with the conceptualisation of the film.