Posted in Media Stories By sacemPosted on February 22, 2017November 19, 2020
In the aftermath of the Ennore oil spill, a fact-finding report revealed that the health of those deployed for the clean-up operations, fishermen and residents, has been compromised due to handling the hazardous sludge without proper protective gear. 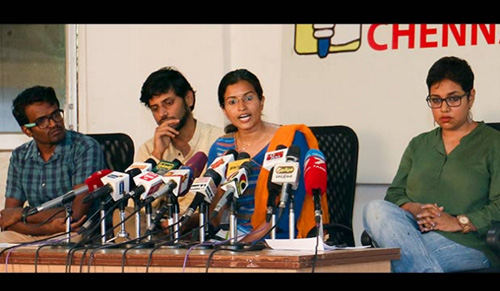 Chennai: A team of medical doctors spoke to more than 50 persons on the morning of February 7, interacting with clean-up crews of the Indian Coast Guard, fishermen, workers from the Fire and Rescue Services and Greater Chennai Corporation (GCC), apart from residents, including the elderly population, women and school students. The survey of the clean-up workers and coastal inhabitants reported increased acute toxic symptoms, primarily of the ocular (eye irritation) and respiratory symptoms (throat irritation, chest tightness and cough). The study also revealed other reported symptoms such as headache, nausea and vomiting. Some reported of skin irritation in exposed parts of the body.

The use of appropriate Personal Protective Equipment (PPE) during the oil spill clean-up was missing, as people used only rubber gloves and boots. “Some of the workers were wearing short sleeves or shorts. The gloves and boots were insufficient to save the skin. No worker was found to be wearing certified respirator masks suitable for such situations.

The Coast Guard had better protection with full coveralls when compared to the fishermen, who barely had any. There was no separate washing area, where workers could clean the oil before eating or drinking water, which increased the exposure. We didn’t see any international best practices being followed,” said Shweta Narayanan, Coordinator, Healthy Energy Initiative, which had published this report.

Dr Shruthee SG, who was a part of the fact-finding team, said that though there was a health-camp set up, it didn’t record baseline health information of the clean-up crew. The fact that there were no health advisories issued was also a concern, she pointed out. “It was shocking that no measures were taken to protect the safety of the children, as there was a school opposite the site of the spill, which was functioning despite students complaining of nausea and sickness. It is therefore recommended that a long-term health monitoring system is in place to detect the onset of new symptoms and trace the effects of these hazardous chemicals on clean-up workers, residents, fisher folk, women and children,” said the medical professional.

Dr Amaran M, another member of the team, said, “The most commonly occurring chemicals of the VOCs (Volatile organic compounds) include Benzene, toluene and Xylene (BTX). BTX are carcinogenic in human beings. Benzene is known to cause leukemia in humans, Toluene can cause kidney and liver damage, and exposure to Xylene can lead to visual blurring, tremors, heart beat irregularities, paralysis.”

This was evident when the residents took advantage of the medical facility for a health check-up. One of the doctors at the camp had said, “The camp is for the cleanup crew but we have been having a lot more local people coming for general complaints”.

‘Poly aromatic hydrocarbons are a worry’

Dr Indumathi Nambi, Associate Professor at the Department of Environment and Water Resources Engineering Division of IIT Madras, said their analysis of the samples revealed that the poly aromatic hydrocarbons could be an important concern. We had collected the samples from the site and analysed it on various parameters  for finger-printing, to ascertain the type of oil spilt, the changes in viscosity, which increased as the days went by and to find out the calorific value of the oil. We found that it could be readily incinerated by pyrolysis. This could be an alternative option to bioremediation, said the expert.

Apart from hydrocarbons such as heavier alkanes, cycloalkanes, asphaltenes and PAHs detected in our study, there could be a trace of heavy metals, which are present in most crude oils. “Most of this could be biodegraded or photochemically oxidised by natural process in the long-term except PAHs and metals. We can treat these complex compounds in a controlled environment with advanced technology.

But it is impossible to clean up the ocean. In an oil spill, there is a chance that some of the oil is still in the ocean. these can settle and deposit at the bottom, leading to bioaccumulation and biomagnification in the flora and fauna,” concluded the academician.