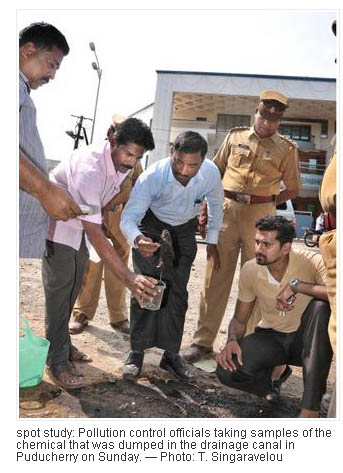 Early Sunday morning residents of Kamarajar Nagar near Ginger Hotel woke up to the acrid smell of chemicals that had spread across area through a drainage canal.

According to a pollution control board official, “heavy pollutants” were emptied into the canal in Kamarajar Nagar.

Several residents felt suffocated and some vomited owing to the smell of chemicals. Most of them complained of burning sensation in eyes and throat. Chemical floated on top of water like oil and the smell spread throughout the area, residents said.

“We woke up at 5 a.m. in the morning when our baby was crying. When we opened the window, the strong smell of chemicals almost choked us. We did not know what the problem was. Finally one of our neighbours told us that someone had emptied chemicals into the drainage canal,” a resident of Kamarajar Nagar said.

“We could not even close our windows and doors because the lack of fresh air made it impossible to breathe,” another resident said.

At around 8 a.m., Fire Service personnel arrived at the spot.

Residents of Thiruvalluvar Nagar staged a protest and blocked traffic when the effluents travelled down the canal into their area and the air filled with the smell of the chemical.

“The government should have taken other steps to get rid of the chemical rather than affecting more households,” a resident said.

The chemical sludge made its way down the drainage canal and reached the sea at Kuruchikuppam.

“We have now received complaints from fishermen about the smell. Once we identify the chemicals in question, we will be able to decide what action to take against the offenders,” tahsildar M.S. Ramesh said.

According to the official from the Pollution Control Board, preliminary tests indicated that the chemical had a pH of 9.4, which meant that it was not acidic.

From the odour, the chemical was identified as spent waste from a pharmaceutical unit. Further tests would be conducted on Monday to identify the exact nature of the pollutant. The reaction of the citizens, with nausea and vomiting, indicates the presence of heavy metals, which typically cause this reaction.

Until 1pm today, there had been no significant loss of aquatic life in the canal, so the chemical was not extremely poisonous like mercury or cyanides, but it was still harmful, the official said.

Once pollution control officials identified the chemical, they would be able to pinpoint the industry that had produced the effluents so that they could take action, the official said. Since it was an aromatic compound, the odour was likely to remain in the air for at least 24 hours and clear up by Monday morning, the official said.