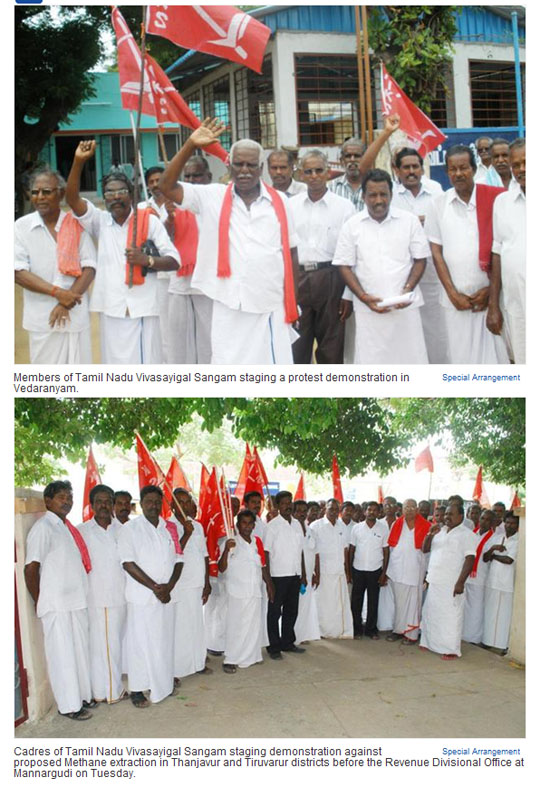 Groundwater depletion and pollution is inevitable when methane is extracted.

The State had entered into a Memorandum of Understanding (MoU) with Great Eastern Energy Corporation Ltd (GEECL) for extracting methane in 2011.

The cadres said GAIL and the Indian Oil Corporation had been laying pipelines to transport oil and gas to Tiruchi from the coastal and delta region, damaging cultivable lands.

The companies should pay hefty compensation to farmers whose lands had been damaged.

At Thanjavur, P. Balasundaram, Thanjavur District President of the sangam, led the agitation in front of the Head Post Office.

R. Thirugnanam, District secretary of CPI and hundreds of cadres of the sangam, took part in the agitation. Similar demonstrations were held at Orathanadu where Durai Manickam, State general secretary of the sangam, led the agitation. Protests were also staged at Pattukottai, Peravurani, Kumbakonam, Papanasam, Thiruvidaimaruthur, Thiruvonam, Madukkur, and Ammapettai.

In Tiruvarur district, protests were staged demonstration in front of the tahsildar office urging the Centre and the State government to drop the project.

P.S. Masilamani, Tiruvarur district secretary of the sangam, led the agitation. At Thiruthuraipoondi, K. Ualaganathan, MLA, led a procession from PSR Marriage Hall to tahsildar office and staged a demonstration.

At Mannargudi, R. Veeramani of the sangam led the a procession from the municipal office and staged a demonstration in front of the Revenue Divisional Office.

At Kottur, P.R. Pandian, district assistant secretary of the sangam, led the agitation. Nearly 250 cadres took part in the demonstration.

The sangam staged protest demonstrations in various blocks across the Nagapattinam district against the proposed coal-bed methane project on Tuesday.

Leading the protests in Vedaranyam, Samandam, district secretary, Tamil Nadu Vivasayigal Sangam, said the State government should intervene and prevent any such move to exploration. They say the project would decimate agriculture, livelihoods, and food security in the fertile delta region.

According to Mr. Sambandam, the permit for exploration was given by the Centre, of which the DMK was a member of the United Progress Alliance and was in power in the State.

Alleging that the permit was granted in a clandestine manner with the GEECL aiming at petroleum exploration licence, the farmers wing of the CPI appealed to the State government to drop the proposal.

Protests were held in all blocks except Sirkazhi, where protests are scheduled for June 20.

The exploration, besides destroying farmlands, would increase the water salinity. The impact would not be confined to Mannargudi, but would be felt across the delta districts reaching up to Cuddalore.