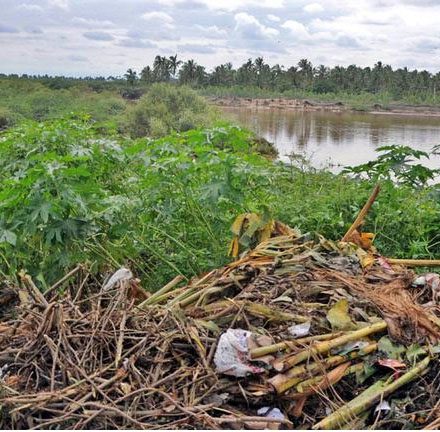 The backwater is severely contaminated and deposits are trapped in the aerial roots of the mangroves leading to their degradation, say activists.

Indiscriminate dumping of garbage and release of untreated effluents by industries along the Uppanar River in Thevanampattinam in Cuddalore is posing a threat to the survival of mangrove forests.

“A large number of industries are engaged in systematic destruction of the mangroves by releasing untreated effluents into the Uppanar. The untreated effluents along with plastic and solid waste dumped by the municipality pollutes the river endangering the flora and fauna. The real ecological value of mangroves has not been realised and dumping of waste is affecting the growth of vegetation and causing ecological degradation,” R. Surendran, president of Cuddalore-based NGO Alamaram, told The Hindu.

Mangroves are a unique habitat system and support number of life forms, including mammals and birds.

They also provide a natural bio-shield to prevent the impact of natural calamities such as tsunami and cyclone.

Though the 2004 tsunami left a trail of destruction in Cuddalore district, villages near Pichavaram remained unscathed by the fury of the tidal waves owing to the mangrove forests spread over 3,000 acres.

Mr. Surendran said that negligence on the part of the authorities had resulted in deterioration of mangroves on five hectares over the last few years.

The livelihood of inland fishermen was also affected as the mangroves were breeding areas for a large number of fishes. Though the area is protected by the government, no steps have been taken to prevent the dumping of waste. Besides, slaughter and poultry waste are also brought to the Uppanar and dumped near the mangroves.

“The backwater is severely contaminated and deposits are trapped in the aerial roots of the mangroves leading to their degradation,” he said.

An action plan should be put in place to protect the mangrove system.

The administration can take up the restoration of the affected areas by planting mangrove saplings on the backwaters bringing estuarine areas under mangrove cover with the support of villages.

The areas should be completely barricaded to prevent industries from discharging effluents into the river, said an environmentalist.