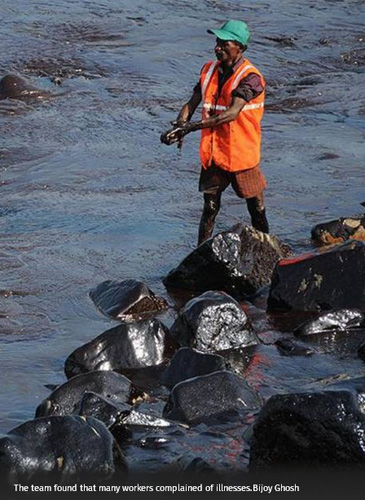 The team found that many workers complained of illnesses. Photo: Bijoy Ghosh

A team of doctors and members of the Healthy Energy Initiative, India, has called for a continual, long-term assessment of all those involved in the oil spill clean-up, including the crew, fisherfolk and residents.

At a press meet on Tuesday, members of a fact-finding team who visited Bharathiyar Nagar, Ennore, 10 days after the oil spill, released a report on the health impact of the spill. The team found a number of workers and residents complaining of skin, eye and throat irritation, tightness in the chest and cough, and some who had had headaches, nausea and vomiting. Members of the team said that while the health camp set up by the State government was managing ailments, it did not record baseline health information of the clean-up crew. In addition, the lack of information on the nature and quantum of the spill made it impossible for residents to take preventive and precautionary measures, they said.

“Crude oil contains volatile organic compounds including benzene, toluene and xylene, which are carcinogenic. Continuous exposure to these chemicals puts workers at a higher risk of developing diseases such as cancers and kidney and liver disease,” said S.G. Shruthee, a doctor on the team.

Speaking about the lack of adequate protective gear, M. Amaran, another doctor, said that they had found discarded, oil-covered gloves and shoes at the site and Corporation workers had to collect them without any protective gear. “There were varying levels of protective gear. The Coastguard had better gear than the fire and rescue personnel, while the fishermen had almost nothing. No one had respirator masks. Nowhere did we see best practices implemented. Even basic things such as cordoning off the site and evacuation of vulnerable populations was not carried out. No information was put out by the State,” said Shweta Narayan of the Initiative. The fire and rescue personnel were in t-shirts and shorts without full coveralls, said Dr. Amaran.

Arun Krishnamurthy of the Environmentalist Foundation of India said that volunteers who had been involved in the clean-up operation had come due to their goodwill to society and had worked in harsh conditions, and should have been sensitised more. “Not many people knew how to protect themselves. There were also a lot of curious onlookers who were unknowingly exposing themselves to hazards,” he said, adding that healthcare workers needed to be trained in responding to chemical disasters.

The team sought a baseline survey and long-term monitoring that would take into account any health changes in the workers, residents and children and said a team of doctors should be formed for this purpose. The report would be submitted to the Directorate of Public Health as well as the State government, they said.