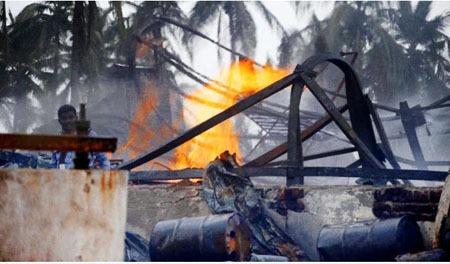 The chemical unit in Cuddalore on Wednesday. Photo: C. Venkatachalapathy
20 affected; most of them complain of respiratory problem, irritation in eyes, throat

As many as 20 persons, including two fire service personnel, suffered minor injuries and burns when a fire broke out in a chemical unit in the SIPCOT Industrial Estate here on Wednesday. A majority of them have complained of irritation in the eyes, throat discomfort and respiratory problem.

While four of the persons who suffered minor burns have been admitted to a private hospitals others are undergoing treatment in the Cuddalore Government Headquarters Hospitals. None of their condition is said to be serious.

The local people told this Correspondent that they saw flames leaping above the height of the compound wall and heard loud explosion. Soon, the company premises were engulfed with dark smoke and fanned with the winds the smoke spread to the nearby villages.

The residents of the Sonaganchavadi village, just about a one-and-half kilometer from the company, were affected the most because of the proximity factor. They mainly complained of eye irritation and breathing problems.

Soon after the fire incident a substantial number of the residents of Sonaganchavdi went to their relatives’ places as a safety measure. For some time, panic gripped the people in the surrounding villages and only when the fire service personnel doused the flames they heaved a sigh of relief. As a large number of people gathered in the vicinity of the company and fire tenders were making hurried trips, the traffic on the Cuddalore-Chidambaram road got affected. On information, Divisional Fire Officer A. Kumarasamy mobilised seven fire engines to extinguish the flames with the help of water and foam guns.

He told TheHindu that two fire service personnel, namely Mahendran and Balakumaran attached to the SIPCOT Industrial Estate Fire Station, who were in the thick of the smoke, got suffocated and swooned.

They were immediately shifted to the government hospital. Mr. Kumarasamy said that it was learnt that when an employee of the company was filling diesel in the oil engine some of the fuel spilled and fell on the exhaust of the engine sparking the fire.

Soon the fire spread to the chemical barrels containing hydrogen peroxide. However, with alacrity the fire service personnel removed quite a number of barrels before they too caught fire.

Another version had it that when the labourers were unloading the chemical barrels from a container one of the barrels accidentally fell on the floor and got exploded, triggering the fire. On information District Collector Rajendra Ratnoo and Superintendent of Police A. Radhika rushed to the spot to make rescue arrangements. Mr. Ratnoo told this Correspondent that no sooner than he received the news did he put in place a contingency plan. Besides deploying adequate number of fire tenders, the State Transport Corporation buses too were kept ready, in case any evacuation of the people in the nearby villages was needed.

He assured the people of Songanchavadi that if they were so desirous he would arrange for their accommodation and food in a safe and secure place. The Collector also said that he had instructed the Tamil Nadu Pollution Control Board officials to monitor the air quality to study whether there was any trace of toxic materials. He had also informed the medical fraternity the characteristics of hydrogen peroxide so they could immediately provide proper health care.

Fire breaks out in SIPCOT unit