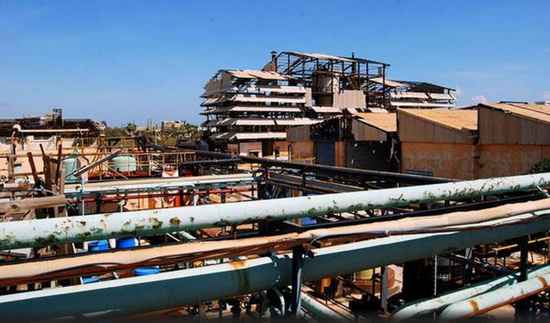 Red-flagging:The pollution problem in SIPCOT, Cuddalore, is cited as an example of the ill-effects of industrialisation.

TAMIL NADU: The traditional livelihood of fisher people and the coastal communities living within the CRZ area (500 m. from the sea) was facing threat owing to industrialisationproposalsalong the coast as part of the Sagarmala programme, activists associated with the National Fishworkers’ Forum have said.

The increased commercial activities through new ports and petrochemical hubs planned on the coast would hit fishing and also increase the threat of extreme weather events in the State, Narendra Patil, NFF Chairperson said. The speakers also opposed the widespread violations of the existing CRZ norms due to the project as it could increase the problem of coastal erosion.

The Sagarmala programme, worth eight lakh crore, was a Union Ministry of Shipping project. Under the port modernisation plan, new port development and port-linked industrialisation would be undertaken from 2015 to 2035. Six ports were planned as part of the programme  in Sagar Island, West Bengal; in Paradip Outer Harbour, Odisha; in Sirkhazi and Enayam, Tamil Nadu; in Belikeri, Karnataka and in Vadhavan, Maharashtra. Of these, in-principle approval had been obtained for setting up a major port at Enayam andthe techno-economic feasibility report had been prepared for the Sirkazhi port and submitted to the Lok Sabha by Minister of State for Shipping, Pon Radhakrishnan

Prafulla Samantara, Odisha-based social activist who had recently won the Goldman environmental prize, told The Hindu that port development in Odisha was threatening the Chilika lake, and also the nesting grounds of Olive Ridley turtles there. “Chemical pollution on the coast has already put the livelihoods of one lakh traditional fishermen under risk,” he said.

Jesu Rathinam, convenor of Coastal Action Network, said that the Petroleum, Chemicals and Petrochemicals Investment Region (PCPIR) proposed in the Cauvery delta region would be disastrous for groundwater quality as it will increase pollution. “Though the State government has delineated only 49 villages in Nagapattinam and Cuddalore district, the adverse impact will be felt across the region,” she said. Citing the example of SIPCOT, Cuddalore, she said the pollution problem in Cuddalore was a sign of what was to come if more industrialisation was encouraged along the coast.

Jesiah Joseph, ex-municipal chairman, Colachel, and coordinator of people’s movement against the Enayam International Container Trans-shipment Terminal, said the Enayam port was located within 20 km of the Adani-led Vizhinjam port and it would be an environmental and financial disaster.

Mr. Jesiah Joseph also drew attention to the threat of displacement that was hanging over people who live and work along the coast as a result of the proposed projects.

“Till now there has been no effort to elicit the opinions of coastal communities or involve them in the project planning or assessment process.”