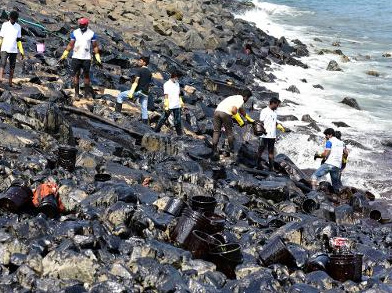 Those engaged in the clean-up without protective gear have higher chances of being afflicted by cancer, a report said

CHENNAI: Raising an alarm over the hazards faced by workers involved in the massive clean-up operations following last month’s oil spill in the city, a fact-finding team has urged the government to closely monitor their health. The team released its report on Tuesday amid criticism over manual removal of toxic sludge from the seashore using buckets after the collision of two ships outside the harbour of the Kamarajar Port in Ennore on January 28.

The team comprising three physicians had conducted a field study at Bharathi Nagar, a hamlet in the vicinity of the oil spill on Ennore Expressway, on February 7. Those engaged in the clean-up operations without protective gear have higher chances of contracting cancer and health issues relating to the liver and kidney, said the report.

“Fire and rescue service personnel were not provided with safety gear on par with the Indian Coast Guard… Initially, local fishermen had suffered short-term effects such as irritation in eyes and respiratory problems on the first day of the spill,” said Amaran, a member of the team. Considering the health impact, the fishermen community, particularly children, must be assessed continuously during frequent intervals, besides the workers engaged in the clean-up, he added.

According to the report, since health camps were only set up a week after the spill, there is no estimate of the effects on people who were involved in the early stages of the clean-up when exposure to the volatile chemicals was maximum, making it even more hazardous than it was during the visit of the team.

S G Shruthee, another member of the team, noted that crude oil has several hazardous chemicals. “Handling such chemicals without protective measures will cause skin problems. Those exposed have a greater risk of contracting cancer in the long term when compared with the general population,” she said.

Speaking on the occasion, Arun Krishnamurthy of the Environmentalist Foundation of India said the oil spill was the final nail in the coffin of the estuary, which is already affected by dumping of waste. “We are requesting transparency from the government by announcing the volume of oil that has been spilled,” he said.