A PROJECT OF THE OTHER MEDIA 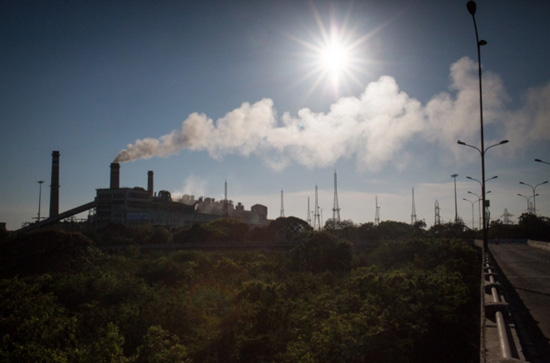 Ennore air quality is far worse than the air quality in Manali, an petrochemical industrial area that was notified as a critically polluted area. This finding was noted in a report released by Chennai-based Coastal Resource Centre based on scientific analysis of Ennore air samples for PM 2.5 (dust) and heavy metals. At between 105.7 and 141.5 micrograms per m3 of air, PM2.5 (dust less than 2.5 micrometres in size) levels in all four samples were 1.7 to 2.3 times higher than the 24-hour standard of 60 ug/m3 prescribed by the Ministry of Environment, Forests & Climate Change (MoEFCC). Levels between 55.5 and 150 ug/m3 will trigger a public notification of “unhealthy” air if such levels are found in US cities.

All samples also had alarming levels of one or more toxic heavy metals such as manganese, lead, nickel and arsenic.

Manganese, lead and nickel are neurotoxins that damage the brain. Children are particularly vulnerable to the effects of lead. Exposures to even low levels of lead early in life have been linked to effects on IQ, learning, memory and behavior.”The Tamil Nadu Pollution Control Board is unresponsive to our complaints. The power plants around Ennore have destroyed our environment and health, and more are planned with no regard for our ability to withstand pollution,” said a representative of the Coalition of All Ennore Fishing Villages.

The 6-village coalition to save the Ennore Creek has called for a moratorium on expansion of thermal power plants and other industries in the region.Ennores air quality is already harming people. The Government should take urgent steps to improve air quality, institute a health survey to identify damage and rehabilitate affected people, said Dr. Rakhal Gaitonde, a public health specialist. All samples were taken from housetops in Kattukuppam, Mugathwara Kuppam, Athipattu and Ernavur. All locations are within 2-3 km radius of the nearest power plant or ash pond. The 24-hour samples were taken using filters fitted to a low volume air sampler and analysed for PM2.5 and heavy metals in Chester LabNet at Oregon, USA.